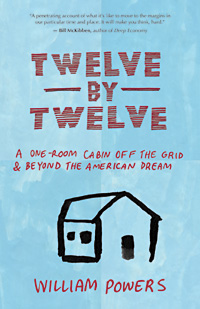 Author’s Note: A free review copy of this book was provided to me by the publisher, New World Library, which is part of the Green Press

Initiative. Like most of their titles, the book was printed on 100% post-consumer recycled paper.

The modern age has given birth to scores of how-to books, and the environmental movement has played no small part in that. There are “green” how-to books, magazines, and websites on nearly every topic: how to garden organically*, how to create the perfect compost, how to keep bees and produce your own honey, how to cut your energy costs…

William Powers’ book, Twelve by Twelve: A One-Room Cabin Off the Grid and Beyond the American Dream (affiliate link), is quite different. It is not a book about how-to-do in a time of environmental, social, and personal perils, but about something more important: how-to-be.

Powers tells the story of his stay in a 12×12 “house” in rural North Carolina, a house that is really a shack, since it has no electricity, running water, heating or cooling system, or other modern conveniences–and its diminutive size legally qualifies it as a shack or shed, not a residence. Instead, it offers an abundance of natural beauty, food from the nearly year-round (and nearly self-perpetuating) garden along with productive neighbors, and solitude in which to cultivate a greater awareness.

Like the shack itself, Twelve by Twelve is a book of 12 and 12: 12 chapters divided into two parts. The division is interesting, splitting up roughly a journey to the center and then a rise to another level of awareness and understanding. Throughout, however, we witness the constant interplay of different emotions; just as in real life, in this book we move so quickly from the beauty of a butterfly to the horror of an industrial chicken farm (which constantly looms nearby, its physical and olfactory presence appearing at various key moments).

This not being a how-to book: you will not be taken through the intricacies of permaculture or the day-to-day joys and struggles and living off the grid. Indeed, Powers spends as much, if not more, time recounting his journeys around the globe as an aid worker and offering his philosophical insights during and after his stay than he does describing the minutes, hours, and days of his solitude. Yet his sabbatical in the shack is the ever-present foundation for these aspects of the book, whether it is mentioned explicitly or not. The result is a masterful weaving together of past, present, and potential future(s) into one timeless story that speaks to both head and heart.

Into the Woods… and Off the Grid

Powers begins his 12×12 sabbatical shortly after returning to America, at which point he feels like “a man without a country.” Despairing over the signs of overdevelopment and globalization, which make a beautifully textured world so dismally “flat,” he wonders if his work has been for naught. “Have the well-rounded objectives of America’s Founding Fathers–life, liberty, and the pursuit of happiness–been flattened to a single organizing principle: the unification of greed?” (7). At the same time, “The world had lost its shape,” he reflects, “and I had lost mine” (12).

But in the quiet, underdeveloped setting of the shack and the thriving natural world around it, Powers is able to journey into himself and reconnect with the world as a whole–one of joy and sorrow, failure and success, destruction and creation, individuality and community, death and life. He meets other local “free-range people,” who have opted out of the “Empire” of modernity and are instead conducting a profound “experiment to create a fruitful life on the margins” (41). Powers thus comes to learn as much from them as he does from nature and the utter solitude in the shack, all of which serve as opportunities for insight and self-discovery.

A large part of this insight involves finding a way to be in this world, as it is, and then to act in an appropriate manner, driven by mindfulness and compassion rather than greed on the one hand or anger on the other. The steps towards this sort of enlightened action are see, be, and do:

Seeing, Being, and Doing…from the Center

Undertaking this path of being and doing, Powers presents us with the many “problems” that he and we encounter in daily life, from genocide to ecocide to racism to poverty to endless consumption and beyond. But these are all the shoots of one plant, growing from the same root problem: selfishness and a lack of connections, to our fellow humans and to the natural world. Perhaps worse is the undeniable complicity that anyone in the modern world shares in this state, whether or not that person is also engaged in efforts to make a positive change. Powers comes face to face with his own “false privilege” as a resident of a modern country, globetrotting in airplanes and eating foods from various unsustainable sources. Even his actions to reduce harm bring with them various harms to the ecosystems and residents of other places (131-32).

How can one escape this paradox, and the guilt and self-contempt that easily comes with it. How can one avoid cynicism, despair, and surrender?

This is an age-old question, one that I myself have struggled (and am currently struggling) to answer in some way that does not ring with the hollow sound of rationalization or convenience. Powers reaches some sort of an answer, though it is less a maxim to post on your refrigerator than a fuzzier idea of how-to-be from which one must find one’s own answers.

The answer, if one can call it that, comes in allowing–in accepting that “The world is perfect and cannot be changed” (as Lao Tzu says in the Tao Te King) and getting beyond the dualities of normal rational thinking. With such allowing, a gentle love for the world in all of its darkness and its light, one can find one’s true ethical foundations and then act accordingly. Such mindful action is not so much about winning battles or changing the world, but about acting as one force within a world of many forces. It is about acting truthfully through following one’s heart and, by doing so, joining the dance of contrary elements that balance and sustain the world.

If this sounds naïve or wishy-washy, perhaps it is because we create a world for ourselves that provides for solid answers, where 1+1=2 and routine rules the day. But in nature, we can step back and see how balance is achieved through contraries, how reality underlies the vibrant dance of change as a foundation of stillness and silence. And how so much is beyond our conscious understanding.

It is up to each of us to take this journey into the still center, to give the world the greatest possible gift by “being true to your deepest self” (242). This, and only this, is the way to be and to do (not the other way around). After all, Powers writes, “We decide what gets globalized–consumption or compassion; selfishness or solidarity–by how we cultivate the most valuable place of all, our inner acre” (258).

With such an obviously philosophical and meditative quality, William Powers’ Twelve by Twelve may not appeal to readers with an itch to get active, to change the world as they want it, to battle the forces of evil, and to undo the wrongs in every place on our planet.

This is a much slower, much deeper book, which will compel you to serious reflection and, perhaps, momentous changes deep within yourself. If we can but slow down in our various rushing and fretting and take to heart the messages in Powers’ memoir, we may find a more solid, vibrant foundation upon which to stand and to act in this world as it is. For, as the Buddha’s statement in the Dhammapada reveals to us, “If one man conquer in battle a thousand times a thousand men, and if another only conquers himself, he is the greatest of conquerors.”

Want to experience some of elements of living off the grid? Check out our listings for solar panels, wind turbines, rainwater barrels, solar radios, and more…