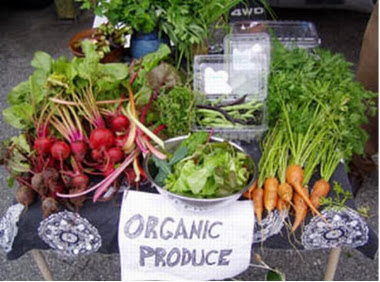 Apologies for missing you last night… had this one almost ready to go, but just couldn’t come up with a good finish… and still not certain I have…

We’ve all heard the rebuttal generally given to a push for more organic agriculture: “But it doesn’t produce as much food.” According to a study by a research team at the University of Michigan, that assumption may be wrong. According to Science Daily,

[The scientists] found that in developed countries, yields were almost equal on organic and conventional farms. In developing countries, food production could double or triple using organic methods, said Ivette Perfecto, professor at U-M’s School of Natural Resources and Environment, and one the study’s principal investigators.

The study also addresses another claim made against widescale organic agriculture: that there’s not enough nitrogen-rich organic fertilizer available to sustain it. Perfecto and team not only argue that existing quantities are sufficient, but also that more land wouldn’t need to be put into service to produce enough food.

I’d guess that the big agribusiness companies will challenge the findings of this study, particularly chemical fertilizer makers. Of course, the organic food market is growing so quickly in the US (16.2% in 2005, according to the Organic Trade Association) that it may not make a difference here: many farmers are going organic already because the demand is so high. The developing world, however, is another story. I’d imagine that many farmers in the Third World (who haven’t already switched) are hearing about the miracles of “modern” agriculture… this could put a dent in their enthusiasm… assuming they hear about it, of course.

For another take on this, GO’s Elizabeth Redmond wrote about this, and a USDA study with similar findings, this morning.