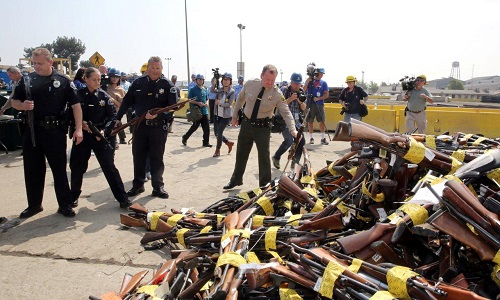 What’s the most recycled material in the US? Judging from what you see in your own and other’s recycling bins, you’d probably guess aluminum or paper. But neither is correct: steel beats them all (largely because of its magnetic properties – it’s much easier to pull out of the trash than other materials). 80 million tons of the materials are recycled each year in North America.

Most of that steel comes from cans, appliances, old cars, and demolished construction. But guns also have steel in them, and given that tons of confiscated guns get melted down every year, that’s a significant source for this metal. What happens to all of that gun steel?

Well, in Los Angeles County, California, they’re using one of the world’s oldest statements about recycling – “beating swords into plowshares” – as a metaphor for handling the 5.25 tons of guns they melt down each year. The Department announced in early July that 3400 guns slated for destruction would be recycled in steel reinforcing bar – better known as rebar – for road and bridge construction projects throughout the Southwest. 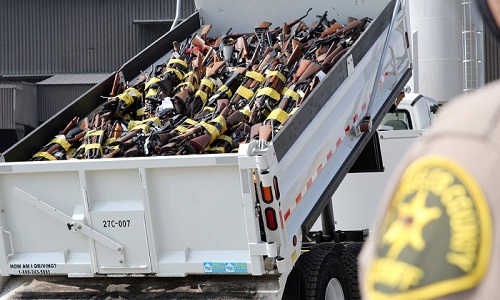 In addition to the LASD, ten other policing agencies from the area will be contributing confiscated weapons. LASD donates the trucks from transporting the weapons, and Gerdau Steel Mill in Rancho Cucamonga has offered its furnaces and workers to complete the job.

Know of other interesting ways that weapons slated for destruction have been recycled? Share them with us in the comments.

via Global Construction Review and Planetizen