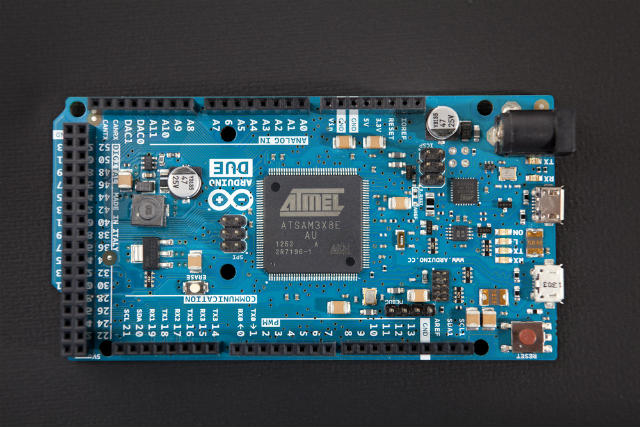 I had so much fun putting together last week’s post of upcycling projects involving the Raspberry Pi computer that I decided to keep digging. This time, I focused on projects featuring Arduino. This “open-source electronics platform” isn’t a computer per se; it’s more like the electronic “brains” inside appliances that control their functioning. Its purpose: to give makers/hackers the tools needed to add interactivity to their projects.

Arduino’s been around longer than Raspberry Pi, so there’s been more time for tinkerers to explore its possibilities. And, as I’ve seen while searching, it’s become the go-to platform for taking old, often obsolete objects and giving them new life. While most of the upcycling with Arduino has involved electronic waste of various kinds, there are also some pretty cool projects featuring more traditional crafting. Check out the examples I’ve found here…

1. The “Blinky Bike Bag”: Rear blinking lights are a must-have for bicyclists, so “fabric hacker” and upcycler Agy took a broken umbrella, added an Arduino board, and after some sewing and such, created this unique bag with built-in blinkers. She’s got complete instructions, with lots of pictures, on her blog. via Arduino blog

2. The Digital Clock Made from an Old Hard Drive: Got an old laptop laying around? Jason Hotchkiss has this great project for upcycling its hard drive into a very unique digital clock. He gives you the overview in the video below, and has many more details on his blog. via Make

3. The Wheelchair Robot: Yep, if techies are making things, eventually robots are going to come into the mix. Instructables user Dark Light made the rounds of health care facilities to gather up junked electric wheelchairs, and with some parts laying around the house, and a purchased Aruino board and some sensors, built the “smart” wheelchair concept pictured below. He details his work at Instructables.

4. The CNC Sewing Machine: Like a CNC router, Andrew Lewis’ upcycling of an old sewing machine adds computer control to allow for automation of the process: the sewing machine takes a pattern fed to it, and sews appropriately (including different kinds of stitching). While there isn’t much in terms of DIY instructions here, he does provide the Arduino code he’s using at two posts (here and here) on Upcraft.it. Here’s the machine in action:

5. The “Floppy Drawbot”: This project is probably the least immediately useful one on the list: the “Floppy Drawbot” is a demonstration project that Matthew Venn and Sturat Childs used to introduce “upcycling electronics, robotics, arduino, [and] art with maths/code” to others at the Bristol Hackerspace. They’ve created a very detailed set of instructions available at Instructables, and also provide a more basic overview in the video below. via Arduino Blog

6. Turning an Old Printer into a Vinyl Cutter: Sheet vinyl isn’t particularly clean or green, but it is used by an awful lot of crafters for various projects. Instructables user liquidhandwash shares the details of his transformation of an old printer into a vinyl cutting machine with a whole lot of tinkering, and some help from Arduino. There is a video, but its a little hard to watch…

7. This: OK, this one feels a bit like cheating, as there are no details whatsoever… but, c’mon, it’s pretty cool… via adafruit

Know of other projects that take advantage of Arduino to upcycle “junk” into interactive machines and objects? Do share…