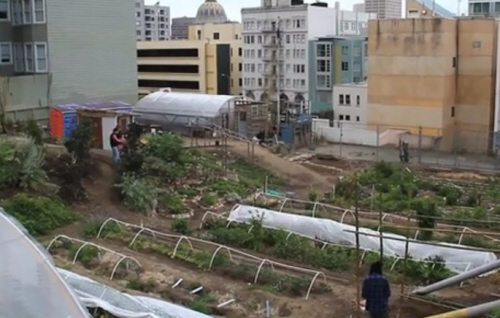 Think urban agriculture is just a passing fad? More a way for hipster urbanites to feel good about themselves than a real answer to food supply issues? You may well be right… but the growth of urban farming and community gardening tells us it does fill a need. Maybe that’s largely a sense of accomplishment provided by growing a little of one’s own food, or addressing, in some small way, a lack of access to fresh produce in urban food deserts. It certainly represents an admirable effort by urbanites to take responsibility for at least a portion of their food supplies.

Dan Susman and Andrew Monbouquette saw that, despite the growth of urban agriculture around the United States, there wasn’t much going on in their home town of Omaha, Nebraska on this front… so they decided to strike out on a road trip to see what was happening in other cities. Growing Cities, a feature-length documentary, is the result of that road trip – check out the preview above.

Dan and Andrew want to get this film finished, and, like other budding movie makers, have gone to Kickstarter to raise funds for final work on the film. Check out their campaign page, and if you like what they’re doing, consider kicking in a few bucks. Come back and let us know what you think, of course…