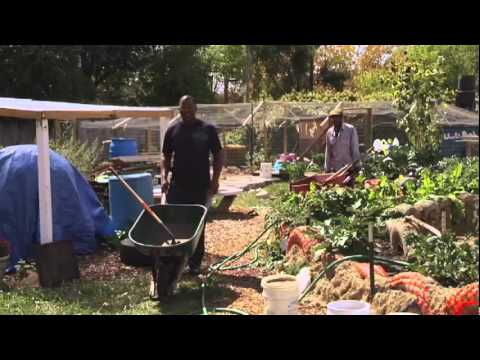 Editor’s note: This post is the first in our series on urban agriculture success stories.

Under 50 years old? Than it’s probably difficult not to associate the phrase “urban decay” with Detroit, Michigan… as long as I can remember, this once thriving manufacturing hub has been the symbol of how bad it can get when business and citizens start heading for the suburbs.

We’ve all see the American auto industry pick back up recently… but it also looks like the Motor City will not be putting all of its economic eggs in one basket from this point forward. One element of urban revitalization that’s taken hold: urban agriculture. In fact, despite all of its challenges, Detroit has become a national leader in the development of small scale, inner city food production.

As the Christian Science Monitor pointed out just over a year ago, the city’s distressed past ironically makes it ideal for urban farming: “…land is cheap, empty lots are plentiful, and residents are desperate for jobs.” Residents, non-profits, businesses and the local government all think that food production within the city could contribute to its upswing. Some of the outgrowths of this enthusiasm includes

No doubt I’m just scratching the surface here… if you know more about Detroit’s urban agriculture efforts, tell us about them…

Next in our series: Chicago