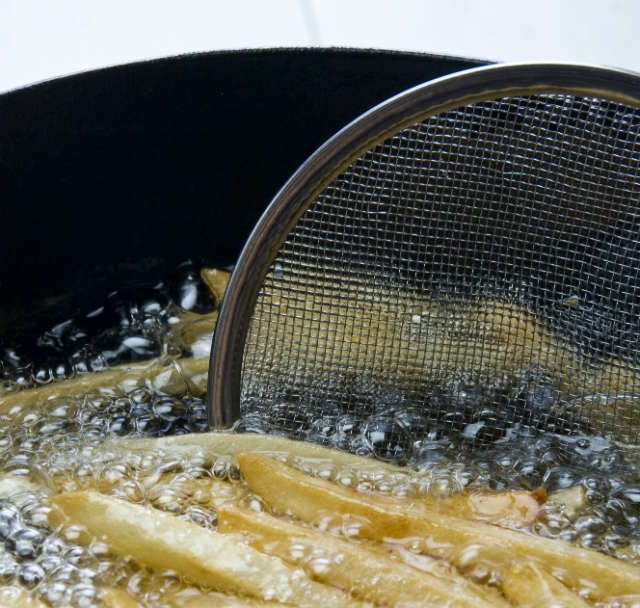 There’s nothing new about taking fryer grease and turning it into a biofuel: hobbyists have been doing it for decades, and running their vehicles with diesel engines on the leftovers from restaurants (and saving those restaurants disposal costs in the process). But can such a process scale to the commercial level? Can the manufacturers of vehicles come up with useful ideas on what to do with used cooking oil… that make sense for the environment and the economy?

Well, yes: it can in places where deep frying is the standard method of cooking… or, at least, that’s what aviation manufacturer Boeing thinks. The Chinese create a lot of used cooking oil, and Boeing thinks it can take that waste and turn it into jet fuel. It also thinks this transition will make a big difference in a plane’s carbon footprint, and that’s good news for all of us. Jo Borras at sister site Gas 2.0 has all the deets…

Chinese cuisine is famous for its fried delicacies. Multiply that passion for fried food by over a billion people, however, and you end with (literally) tons of used cooking oil being generated every minutes. Aircraft giant Boeing has a plan for all that oil, though- it’s turning China’s excess waste oil into a clean, renewable source of jet fuel.

The latest plan- which follows up on Boeing’s commitment to biofuel made in the Middle East- will turn more than 500 million gallons of waste cooking oil, commonly referred to as “gutter oil” in China, into sustainable aviation biofuel at a new facility that the aviation firm (in conjunction with the Commercial Aircraft Corp. of China, or, “COMAC”) showed off to investors last week.

The new fuel is expected to cut the two companies’ carbon emissions by 50-80 percent, compared to petroleum-based fuels. That’s huge! “We are very happy to see the progress that has been made … in aviation biofuel technology,” said Dr. Guangqiu Wang, Vice President of COMAC’s Beijing Aeronautical Science & Technology Research Institute. “We will continue to work with Boeing in energy conservation and emissions reduction areas to promote the sustainable development of the aviation industry.”

You can check out the Boeing/COMAC official (joint) press release, below, and let us know what you think of the commercial/military future of aviation biofuels in the comments section at the bottom of the page.

“Strong and continuing teamwork between Boeing and COMAC is helping our industry make progress on environmental challenges that no single company or country can solve alone,” said Ian Thomas, President, Boeing China. “By working together for mutual benefit, we’re finding innovative ways to support China’s aviation industry and build a sustainable future.”

Boeing and COMAC are sponsoring the facility, which is called the China-U.S. Aviation Biofuel Pilot Project. It will use a technology developed by Hangzhou Energy & Engineering Technology Co., Ltd. (HEET) to clean contaminants from waste oils and convert it into jet fuel at a rate of 170 gallons (650 liters) per day. The project’s goal is to assess the technical feasibility and cost of producing higher volumes of biofuel.

“We are very happy to see the progress that has been made in the collaboration between Boeing and COMAC, especially the achievement in aviation biofuel technology,” said Dr. Guangqiu Wang, Vice President of COMAC’s Beijing Aeronautical Science & Technology Research Institute. “We will continue to work with Boeing in energy conservation and emissions reduction areas to promote the sustainable development of the aviation industry.”

Sustainably produced biofuel, which reduces carbon emissions by 50 to 80 percent compared to petroleum through its lifecycle, is expected to play a key role in supporting aviation’s growth while meeting environmental goals. The Boeing Current Market Outlook has forecast that China will require more than 6,000 new airplanes by 2033 to meet fast-growing passenger demand for domestic and international air travel.

Boeing and COMAC have been collaborating since 2012 to support the growth of China’s commercial aviation industry. Their Boeing-COMAC Aviation Energy Conservation and Emissions Reductions Technology Center in Beijing works with Chinese universities and research institutions to expand knowledge in areas that improve aviation’s efficiency, such as aviation biofuel and air traffic management.

Biofuel produced by the China-U.S. Aviation Biofuel Pilot Project will meet international specifications approved in 2011 for jet fuel made from plant oils and animal fats. This type of biofuel has already been used for more than 1,600 commercial flights.