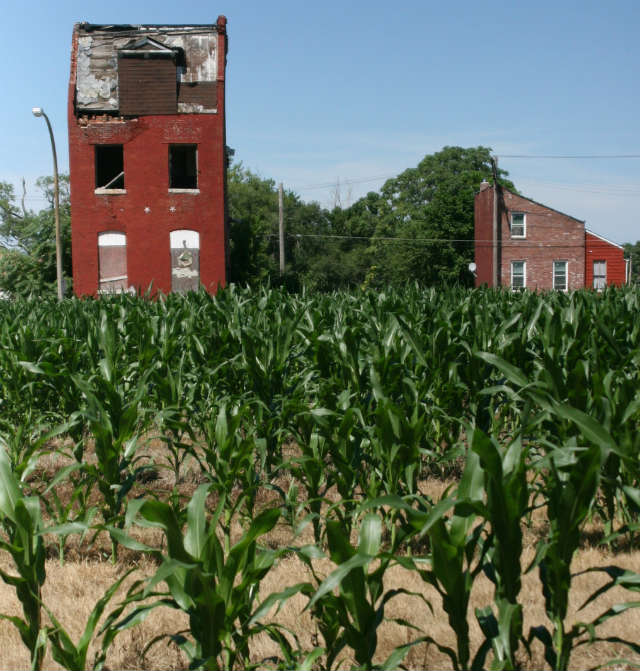 I suppose I’ve got relatively narrow visions of a sustainable farming community: either an ecovillage, where food production is woven into the life of the of the residents, or the “urban farm,” where food production is implemented within existing (but often decaying) infrastructure.  Growing food isn’t just a livelihood in these settings; it’s a integral part of what brings people together and gives them a common sense of purpose. No doubt there are variations on both of these models that have succeeded in not only increasing fresh food availability to local residents, but also connected these people more closely with one another and the natural world around them.

In the past couple of weeks, however, I’ve come across a couple of other variations that I’m not so sure really represent genuine sustainable development. That doesn’t mean that the farming/gardening isn’t done with the long-term health of the land and people on it in mind, but, rather, that food production was integrated either into a model that isn’t particularly sustainable to begin with, or done in a manner that doesn’t really insure its long-term success. Let me jump right to the examples I found.

I started thinking about this notion of the farming community when I came across an LA Times article on Rancho Mission Viejo’s Sendero village, an “agrarian-oriented residential development in south Orange County.” I spent a bit of time on the development’s website. While it certainly looks like a pleasant place to live, and I love the idea of building a community around farming and gardening, Sendero doesn’t strike me as particularly “sustainable.” In short, just because you’ve taken the golf out of the community doesn’t mean you don’t have a “golf community.”

Let me explain: this strikes me as very standard 90s-00s suburban development. I don’t know if there’s a gate with a security guard, but I’m guessing this is set apart from other communities, and a distance from commercial activities that Sendero residents want/need. So, sure, you can buy some fresh produce from the local “farm,” but everything else means a drive to a grocery store elsewhere. While I realize there are plenty of people that desire and will pay for such living arrangements, I’d love to see just a little more density and mixed use here. Gardens and farms are great for local food; how about a variety of local commercial activity that creates both a community and an economy?

The other example I came across is much closer to home (for me): in North St. Louis city, which has an awful lot of decay, poverty, and crime, developer Paul McKee (who wants to redevelop much of this part of town) has leased 62 acres to Jackie Joyner-Kersee’s Family Roots International, a for-profit “urban agriculture company.” Joyner-Kersee herself describes the farm in the middle of the city as a means of creating economic opportunities and providing local food to grocers and families. That’s it at the top of the post…

If all that acreage supported fresh vegetables – like, say, New Roots Farm, also in North City – I’d say this is a step in the right direction. However, the Family Roots International farm is growing corn and soybeans. That sounds like cash crops to me, not plants that’ll be harvested and sent to the grocery store. More likely, I’d guess a lot of this will go into animal feed.

And while residents at Sendero in Southern California get to choose their “agricultural” lifestyle, the folks in North City claim they had no say in the new farm… and they’ve got concerns ranging from new pests to muggers and rapists hiding among the corn stalks. The notion of using this land for agricultural experiments, and even as an attempt to bring plant sciences into the inner city, all seems laudable… but, so far, what’s happened seems quite different from the vision Joyner-Kersee shared in the interview linked above. Not exactly the way to bring a community together around agricultural initiatives.

I definitely like the idea of bringing food production into community development… I’m just not sure that either of these examples work particularly well. Perhaps my own vision is a bit too radical – I have spent quite a bit of time up at Dancing Rabbit, after all. What do you think? Are these legitimate efforts to shift towards more food production within community settings… or efforts to take advantage of new forms of agrarianism without much concern about long-term sustainability?