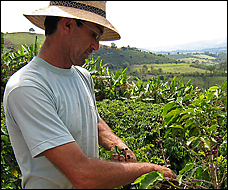 One of my Treehugger colleagues beat me to the punch on this one, but it’s news definitely worth spreading: Wal-Mart is considering expanding its sales of Bom Dia coffee, a Brazilian Fair Trade-certified brand, into all of its stores. It’s carried the coffee at Sam’s Club for two years, but selling it at all of the giant retailer’s stores would mean a huge bump in sales for the Brazilian cooperative that produces the beans. Interestingly enough, Sam’s Club started carrying the Fair Trade brand for the same reason it chooses most of its suppliers: despite paying premiums to farmers, Bon Dia still had a cheaper product than Millstone Coffee’s Fair Trade product:

When [Sam’s Club buyer Mark] Hoffman tried to bring Bom Dia coffee to Sam’s Club, the first question he got was, “Well, what are you getting rid of?”

The brand’s Mountain Moonlight Fair Trade Certified blend sold on its Web site recently at $8.99 for a 10- to 12-ounce package of whole beans, or about 75 cents to 90 cents per ounce. Bom Dia’s fair-trade coffee sells at Sam’s Club for $11.77 for 40 ounces — about 29 cents per ounce.

“Just look at the cost,” Hoffman said. “They couldn’t come close to what we were trying to accomplish.”

Hoffman’s efforts to switch coffees were two years ago. Sam’s Club is now Bom Dia’s largest customer and one of the top three U.S. retailers of fair-trade coffee, TransFair USA said. The companies have an arrangement that displays both brands — Bom Dia’s Marques de Paiva and Sam’s Club’s Member’s Mark — on the packaging.

A team of executives from Bentonville will be traveling to Brazil later in the month to examine Bon Dia’s operation and to meet with farmers like Rosevaldo Jose Pereira, who’s been able to support his family in relative luxury since the Sam’s Club deal came through. Right now, the only downside I can see to this is that Bon Dia is selling exclusively to Wal-Mart (and, obviously, would continue to do so should the new arrangement come through). Putting all of its eggs in one basket is a risky move — let’s hope this doesn’t lead to an undermining of Fair Trade standards by other cooperatives in order to capture the attention of the world’s biggest retailer. Right now, though, this really looks like a potentially massive victory for the Fair Trade movement, as a contract with Wal-Mart will prove that the sale of coffee doesn’t have to involve exploiting those at the bottom of the food chain in order to remain competitive.

I’ll tell you what: if Wal-Mart agrees to this contract, and if no one else can show me a legitimate reason why I shouldn’t, I will take my first trip in years to one of their stores and buy some Bom Dia coffee. While I do think the company still has a lot of work to do in terms of its social and environmental responsibility, I think a move like this deserves recognition. Will I start doing all of my shopping there? No, for a number of reasons. But, I’ll have no problem making this specific purchase, and going back for more…

BTW, the right-wing blogs just can’t figure this out… you know that’s the case when all they can do is call names…