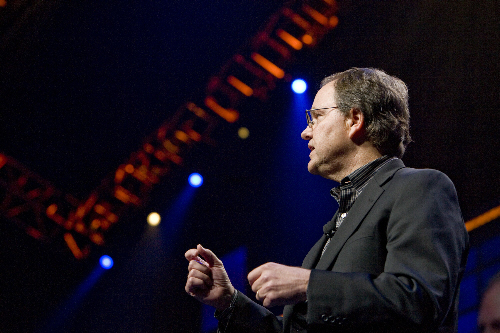 As I noted in Thursday’s post, Wal-Mart CEO Lee Scott’s “Company of the Future” speech to executives and store managers contained some intriguing visions for moves that Wal-Mart could make on helping its customers conserve energy. As I expected, several commenters expressed concern about other areas, particularly product sourcing. Conventional business thinking has heralded the efficiency of the company’s supply chain; activists, on the other hand, have noted that Wal-Mart (along with most major retailers) has benefited from more open global trade policies that, generally, have placed little or no emphasis on workers’ rights, occupational safety, or environmental impact.

Numerous companies have taken a beating for problems with factory conditions in the developing world, while the retail sector in general has had to face both PR and legal nightmares related to the movement of American operations to “cheaper foreign markets” (yeah, I’m paraphrasing Lou Dobbs here). Combine that with recent revelations that some goods from Chinese factories have been tainted with everything from lead to antifreeze, one might wonder why more multinationals aren’t racing back to the US and other more regulated markets. But that’s a different post…

Supply chain issues took up roughly a third of Scott’s speech last week, and, again, the CEO presented some bold concepts for how Wal-Mart might address problems raised by sourcing products from the developing world. The first concerned the company’s relationships with its suppliers:

Our first action will apply to all suppliers who work with us through global procurement, who are domestic importers, or who are manufacturers of Sam’s Club or Wal-Mart private brands. We will require these suppliers to demonstrate that their factories meet specific environmental, social and quality standards. We have already started doing this, and we hope to extend the requirement to all the suppliers I mentioned within the next three to five years.

Second, we will only work with suppliers who maintain our standards throughout our relationship. So we will make certification and compliance part of our supplier agreements and ask suppliers to report to us regularly. Any supplier that fails to keep its word will be required to take prompt and serious action. If a supplier fails to improve and fix the problem, we will stop working with that supplier.

Third, we will favor — and in some cases even pay more — for suppliers that meet our standards and share our commitment to quality and sustainability. Paying more in the short term for quality will mean paying less in the long term as a company. Higher quality products will mean better value, fewer problems, fewer returns and greater trust with our customers. Saving people money is a commitment to our customers throughout the life of the product.

On their face, these were exciting pronouncements… the devil, of course, is in the details. While Scott didn’t spell out the particular standards the company would expect from suppliers, he did call for action within the entire retail sector that could create a higher level of transparency and trust for globally-sourced products: unified social and environmental standards for the industry:

We believe that there should be one framework of social and environmental standards for all major global retailers. And there should be one third party auditing system for everyone. This will ensure improvement can occur across the board on a level playing field.

The leading global retail and consumer goods network, CIES, is working on this, and we are working with them and a number of global retailers to achieve this vision. The effort is now focused on social standards, and I believe it should be expanded to environmental standards as well. Today I call on all major global retailers to join this effort. I stand ready to meet with the CEOs of our competitors and make socially and environmentally responsible sourcing a reality across the entire retail industry.

Again, the vision is potentially bold; the details of such standards, and the stakeholders involved in developing and certifying them, will make all the difference.

The Big Kahuna of Global Sourcing

The last part of Scott’s discussion of supply chain issues involved the 800-pound gorilla of global sourcing: China. In addressing the company’s relationship with the world’s fastest-growing economy, Scott clearly implied that Wal-Mart would continue to source products from China. He laid out processes by which the company would try to ensure product quality and safety:

Over the last few months, we have spent a lot of time talking with leaders in the Chinese government and the NGO community. As the growth of China has exploded, the environment has become an increasingly important issue in that country.

We believe we can make a major contribution here. Wal-Mart will work with the Chinese government and NGOs to make sure suppliers comply with Chinese environmental laws and regulations. We will require our suppliers who export from China to certify that they meet key standards. We will include this certification in our supplier contracts. And we will have a mechanism in place to make sure our suppliers meet these standards throughout the term of our relationship. We commit to doing these things as quickly as possible. And we hope to see significant results within three to five years.

While I’ve let this post get a bit long, I think it’s critical to show the whole vision spelled out on the supply chain: changes here could have massive impacts on the very concept of globalization, and create a system of global sourcing that’s fairer to workers, and treads more lightly on the planet. Some will note (and rightly so) that more local sourcing didn’t come up at all in the speech, and that some of the points raised by Scott will require much more clarification by the company as it puts these concepts into practice.

We certainly can’t accept the kind of vision laid out by Lee Scott without a commitment to following the actions that spring from it. I will say I find the vision compelling, though. I’m also impressed that the company allowed the press to attend the speech — I believe I’m correct in saying that this is the first time any of us have been invited to a Year-Beginning Meeting. The fact that’s it’s pronouncing these visions publicly is commendable: Wal-Mart’s engaging in dialogue, which is something that, by its own admission, it hasn’t always done, or done well, in the past. We’ve got standards by which we can measure progress.

The debate about Wal-Mart’s ability to do business more sustainably isn’t over by any means. But the goals laid out by Scott in this speech deserve our attention. Some have argued that the “big box” retail concept simply can’t make itself sustainable by any respected definition of that term. Given that Wal-Mart and its closest competitors aren’t likely going away anytime soon, though, I think it’s critical that we see speeches like this one as an invitation to dialogue, and act on that invitation.

Of course, I’m not the only one with thoughts on “The Company of the Future”: Lloyd Alter at Treehugger has weighed in, as has David Roberts at Gristmill. Wal-Mart Watch has posted a thorough overview of blogosphere responses to the speech. You can read the speech, or watch it, at the company’s “Wal-Mart Facts” site.

Next (and last): some final thoughts from my visit to the Year-Beginning Meeting.