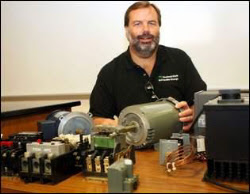 The program is the brainchild of the school’s electro-mechanical engineering department chair, Larry Feist. Writer Mike Boyer notes that the idea struck Feist while taking a tour at another school:

During a tour last year of the EarthConnection, a learning center at the College of Mount St. Joseph in Delhi Township retrofitted with solar heating panels and other energy-efficient equipment, Larry Feist was struck by all the electro-mechanical controls they required…

Charged with boosting program enrollment, which has dwindled to about 60 to 70 students, Feist saw an opportunity.

While this isn’t the first program of its kind in the Midwest, it is the first for Ohio: before the Board of Regent’s approved this major, the state had “…a handful of other programs… aimed at training installers in energy-efficient products, but those are targeted workforce-development efforts.” This program aims higher, preparing students both for “…work in renewable-energy manufacturing and equipment installation and performing energy audits,” and also for continued work on a four-year degree in either electro-mechanical or chemical engineering.

While renewables are definitely cool (or perhaps hot) right now, the opportunity for a good-paying joy upon graduation ought to help Feist meet his recruitment goals (which are currently pretty modest: he’d be happy if ten students joined the program in the first year):

Feist says a graduate of the electro-mechanical engineering technology program can expect to earn anywhere from $33,000 to $43,000 upon graduation. He believes industry’s demand for greater energy efficiency will fuel the market for people will skills in renewable energy and energy efficiency.

These salary figures ought to stay high: the article notes that the numbers all look good for renewables in coming years:

These industries recorded nearly $1 trillion in gross revenues in 2006, including about $51 billion in Ohio. The numbers could skyrocket over the next 25 years – resulting in up to 2.2 million new jobs and $220 billion in annual revenues in Ohio and up to 40 million jobs and $4.5 trillion in revenues nationwide – if federal and state governments would make an all-out push for renewables and super-efficient products…

That’s a big “if,” of course, but it’s hard to see how even the brownest politicians could ignore this kind of potential for economic growth and job creation. While the feds dither, add Ohio to the list of states recognizing the economic potential of renewable energy and environmental sustainability.

The program’s got its first student: Carl Vogt, a 42-year-old computer engineer. Feist is out shaking the bushes, making visits to K-12 classrooms to talk about the importance and potential of renewable energy. With these kinds of potential rewards, I’m guessing he won’t have to make much of hard sell…