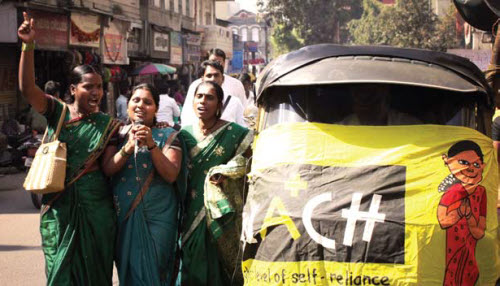 By Neil Tangri and the Global Alliance for Incinerator Alternatives

“Environmental Possibilities: Zero Waste” features new ways of thinking, acting, and shaping government policy that are circling the globe. Each week, we highlight a success story in the zero waste movement, excerpted from the report On the Road to Zero Waste: Successes and Lessons from Around the World by the Global Alliance for Incinerator Alternatives (GAIA). GAIA is a powerful worldwide alliance of more than 650 grassroots groups, non-governmental organizations, and individuals in over 90 countries. Their collective goal is a just, toxic-free world without incineration. Other Worlds is excited to promote the work of GAIA and the organized communities it works with, and hopes that the stories inspire you and others to begin moving your home, town or city, nation, and planet toward zero waste.

Over the last 20 years, waste pickers— workers in the informal economy who recover recyclable materials from trash—in Pune, a city in the state of Maharashtra, India have transformed both their city’s municipal waste management system and their own lives. The waste pickers formed a union to protect their rights and bring dignity to their work. The union has been so successful that it has allowed the women and men to implement door-to-door collection of garbage segregated where it is created (e.g., home, business) and to separately treat organics. Moreover, waste pickers have been able to improve their livelihoods and working conditions.

Like most Indian cities, Pune has long had an informal waste management system operating in parallel with an overburdened municipal waste system. Residents were obliged to place their waste in roadside containers made of steel—each capable of holding several cubic meters of waste—which were supposed to be emptied and taken to the dump daily. In practice, the city only emptied about 40 percent of them each day, transporting the waste to the dump. Neighbors complained about overflowing containers.

The containers did provide a livelihood for waste pickers, who would look through them for recyclable materials, then rebundle and sell to middlemen. However, some of the more valuable material never made it to the roadside bins because house-maids or security guards would lay claim to it and sell it themselves. Other waste pickers worked at the landfill under the most noxious conditions, recovering recyclables that the city had dumped.

In Pune, 92 percent of waste pickers are women, almost all from the lowest, or Dalit, caste. Fifty percent of the women are the primary breadwinners for their families. Before the union, they moved mostly on foot, covering a distance of up to 12 km per day with headloads of up to 90 pounds. For their troubles, they earned an average of US $1.12 a day. The work was, moreover, extremely hazardous. Using bare hands to rummage through putrefying garbage containing glass shards, medical waste, dead animals, toxic chemicals, and heavy metals, waste pickers collected bits of reusable, repairable, and marketable materials. Many sustained repeated injuries, illnesses, and diseases as a result of their work, including tuberculosis, scabies, asthma, respiratory infections, cuts, and animal bites.

Mangal Gaikwad lives in a shantytown in Pune. She talks about how her life changed after joining the union. “Today I earn 3000 rupees from doorstep collection and the sale of scrap. The residents in the area who used to frown at me while I was at the garbage bin, now know my name and greet me. A resident gave me a second hand bicycle. I had never ridden one before. Today, I ride to work on that cycle. When I was a child I used to envy the children who went to school with their bags and water bottles while I had to go wastepicking. Since my work day is shorter now, I was able to attend the literacy class in my slum. I am now literate. I am the treasurer of the credit cooperative and the representative for my slum. I used to be terrified of my abusive alcoholic husband. Twice I sent him to a de-addiction center. He stopped for a while but continues to drink. I am no longer terrified of him. I do not give him money to drink. I have bought a bigger house for 65,000 rupees from my savings and a loan I took from the credit cooperative.”

Other potential dangers in the city’s dumps included injury from falling items—or even avalanches—in the mountains of waste, or being hit by moving vehicles while scrambling to get to the materials being dumped. In addition, there were frequent squabbles between workers, sweepers, and others about territory and who had first claim to any materials of value.

As bad as the physical conditions of work were the social conditions. Without rights to the garbage they sifted, waste pickers were often accused of theft. They frequently had to pay bribes to police and municipal workers. They were vulnerable to sexual assault. They were viewed with distaste, or worse, by most of the rest of society. Their children were refused admission in schools. Nevertheless, they preferred waste picking to construction or domestic work—the other principal occupations open to them—because it afforded greater independence, flexibility, and relative freedom from the feudal and abusive relationships prevalent in those fields.

In 1993, with the encouragement of university activists, some 800 waste pickers attended a citywide convention to give voice to their grievances. They resolved to engage in collective, nonviolent struggle to improve their conditions and established Kagad Kach Patra Kashtakari Panchayat (KKPKP), the first waste pickers’ union in India. From the beginning, the union had a goal of fighting for social justice, and against social, economic, cultural, and political exclusion.

KKPKP’s membership rapidly grew to include 6,400 of the 7,000 waste pickers in Pune as it tackled a number of issues of concern to its members. One of the group’s first victories was to confront police officers who had taken bribes and sexually harassed waste pickers. Faced with several thousand waste pickers, who were starting to garner the support of politicians wanting their votes, the police backed down and returned the money they had taken. The success of this experience encouraged KKPKP to tackle even more issues. In 1995-96, waste pickers won official recognition from city government, which issued them identity cards—something that both protected them from police harassment and was a tangible representation of their improving status in society.

In 1997, KKPKP created a credit cooperative with the participation of over 2,000 members. This freed the waste pickers from their dependency on usurious moneylenders. Another crucial milestone was achieved in 2003, when the municipality took the unusual step of paying health insurance premiums for KKPKP members in recognition of their financial and environmental contribution to the city—the former calculated at US$3.85 million per year.

From Scavengers to Service Providers

KKPKP realized early on that changes in the waste management system could deliver important benefits to waste pickers. For several years, the union encouraged its members to establish door-to-door collection routines. Many did so, and benefitted from the small service fees residents would pay, as well as access to cleaner, better-separated recyclables. In 2008, KKPKP formed a cooperative, Solid Waste Collection and Handling (SWaCH, which means ‘clean’ in Marathi), to help this practice expand. As of May 2012, SWaCH’s 2,000 or so members were providing door-to-door collection for more than 330,000 households, or 47 percent of the city, in both institutional campuses and in ordinary neighborhoods, on a contract basis.

Instead of living at the edges off whatever they could scrounge, the waste pickers came to have clients, provide a recognized service, and be paid a fee. All of this normalized and integrated them socially and economically into the larger community. This change in the waste pickers’ social status and self-perception is one of the most dramatic results of their organizing.

SWaCH members generally earn between US $84 and $112 per month—two or three times what most of them earned before. In addition, SWaCH provides health insurance and some educational benefits, such as school books for their children.

Looking back over 20 years of organizing, KKPKP and SWaCH have achieved remarkable accomplishments. One of the city’s most marginalized and vulnerable populations has become integrated into society. Residents have benefited from improved waste management services at lower costs. The current program saves the city an estimated US $2.8 million per year. Better treatment of organics has reduced emissions of methane, an important greenhouse gas. Higher recycling rates have saved energy, reduced climate impact, and minimized pressure on natural resources such as forests. In the years to come, the program will continue to bring disposal rates down and generate a clean stream of organic materials for composting and biogas.

Copyleft GAIA. You may reprint this article in whole or in part. Please credit any text or original research you use to GAIA.