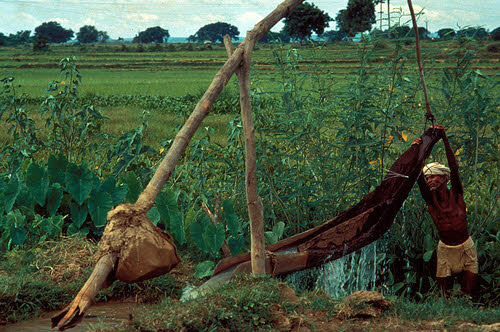 Many countries are facing dangerous water shortages. As world demand for food has soared, millions of farmers have drilled too many irrigation wells in efforts to expand their harvests. As a result, water tables are falling and wells are going dry in some 20 countries containing half the world’s people. The overpumping of aquifers for irrigation temporarily inflates food production, creating a food production bubble that bursts when the aquifer is depleted.

The shrinkage of irrigation water supplies in the big three grain-producing countries — the United States, India, and China — is of particular concern. Thus far, these countries have managed to avoid falling harvests at the national level, but continued overexploitation of aquifers could soon catch up with them.

Other states with shrinking irrigated area include Arizona, Colorado, and Florida. All three states are suffering from both aquifer depletion and the diversion of irrigation water to urban centers. And now that the states that were rapidly expanding their irrigated area, such as Nebraska and Arkansas, are starting to level off, the prospects for any national growth in irrigated area have faded. With water tables falling as aquifers are depleted under the Great Plains and California’s Central Valley, and with fast-growing cities in the Southwest taking more and more irrigation water, the U.S. irrigated area has likely peaked.

India is facing a much more difficult situation. A World Bank study reported in 2005 that the grain supply for 175 million Indians was produced by overpumping water. Water tables are falling in several states, including Punjab and Haryana, two surplus grain producers that supply most of the wheat and much of the rice used in India’s massive food distribution program for low-income consumers.

Up-to-date and reliable information is not always easy to get. But it is clear that overpumping is extensive, water tables are falling, wells are going dry, and farmers who can afford to are drilling ever deeper wells in what has been described as “a race to the bottom.” Based on studies by independent researchers, there is ample reason to think that decades of overpumping in key states are leading to aquifer depletion on a scale that is reducing the irrigation water supply. India’s water-based food bubble may be about to burst.

In China, the principal concern is the northern half of the country, where rainfall is low and water tables are falling everywhere. This includes the highly productive North China Plain, which stretches from just north of Shanghai to well north of Beijing and which produces half of the country’s wheat and a third of its corn. Overpumping there suggests that some 130 million Chinese are being fed with grain produced with the unsustainable use of water.

Furthermore, China’s water-short cities and rapidly growing industrial sector are taking an ever-greater share of the available surface and underground water resources. In many situations, growth in urban and industrial demand for water can be satisfied only by diverting water from farmers. Although new dams being built in the mountainous southwest may offset at least some of the losses elsewhere, it is possible that the irrigated area has peaked in China — and therefore in all three of the leading grain-producing countries.

The Water Deficit in the Middle East

Water shortages are most immediately affecting food security in the Middle East. In 2008, Saudi Arabia became the first country in the world to acknowledge its bursting food bubble when it announced that the aquifer supporting its wheat production was largely depleted. Saudi Arabia is now phasing out wheat production and could be totally dependent on foreign grain as soon as 2013. And in Yemen, water tables are falling by some 2 meters per year. The Yemeni grain harvest has shrunk by one third over the last 40 years, forcing the country to import more than 80 percent of its grain.

Both Syria and Iraq — the other two populous countries in the region — have water troubles. Some of these arise from the reduced flows of the Euphrates and Tigris Rivers, which both countries depend on for irrigation water. Turkey, which controls the headwaters of these rivers, is in the midst of a massive dam building program that is slowly reducing downstream flows. Although all three countries are party to water-sharing arrangements, Turkey’s ambitious plans to expand both hydropower and irrigation are being fulfilled partly at the expense of its two downstream neighbors.

Mindful of the future uncertainty of river water supplies, farmers in Syria and Iraq are drilling more wells for irrigation. This is leading to overpumping and an emerging water-based food bubble in both countries. Syria’s grain harvest has fallen by one fifth since peaking at roughly 7 million tons in 2001. In Iraq, the grain harvest has fallen by one fourth since peaking at 4.5 million tons in 2002.

Jordan is also on the ropes agriculturally. Forty or so years ago, it was producing over 300,000 tons of grain annually. Today it produces only 60,000 tons and thus must import over 90 percent of its grain. In Israel, which banned the irrigation of wheat in 2000 to save water, production of grain has been falling since 1983. Israel now imports 98 percent of the grain it consumes. To the east, water supplies are also tightening in Iran and Afghanistan. An estimated one fifth of Iran’s 75 million people are being fed with grain produced by overpumping, making its food bubble the largest in the region. Afghanistan, a landlocked country with a fast-growing population, is already importing a third of its grain from abroad.

Thus in the Middle East, where populations are growing fast, the world is seeing the first collision between population growth and water supply at the regional level. Because of the failure of governments in the region to mesh population and water policies, each day now brings 10,000 more people to feed and less irrigation water with which to feed them.

Thus far the countries where shrinking water resources are actually reducing grain harvests are all ones with smaller populations. But middle-sized countries such as Pakistan and Mexico are also overpumping their aquifers to feed growing populations.

Pakistan, struggling to remain self-sufficient in wheat, appears to be losing the battle. Its population of 185 million in 2010 is projected to reach 246 million by 2025, which means trying to feed 61 million more people in 15 years. But water levels in wells are already falling by a meter or more each year around the twin cities of Islamabad and Rawalpindi. They are also falling under the fertile Punjab plain, which Pakistan shares with India. A World Bank report, Pakistan’s Water Economy: Running Dry, sums up the situation: “the survival of a modern and growing Pakistan is threatened by water.”

In Mexico, home to 111 million people, the demand for water is outstripping supply. In the agricultural state of Guanajuato, the water table is falling by 6 feet or more a year. In the northwestern wheat-growing state of Sonora, farmers once pumped water from the Hermosillo aquifer at a depth of 40 feet. Today, they pump from over 400 feet. With 51 percent of all water extraction in Mexico from aquifers that are being overpumped, Mexico’s food bubble may burst soon.

If business as usual continues, the question for each country overpumping its aquifers is not whether its food bubble will burst, but when — and how the government will cope with it. For some countries, the bursting of the bubble may well be catastrophic. And the near-simultaneous bursting of several national food bubbles could create unmanageable food shortages, posing an imminent threat to global food security and political stability.