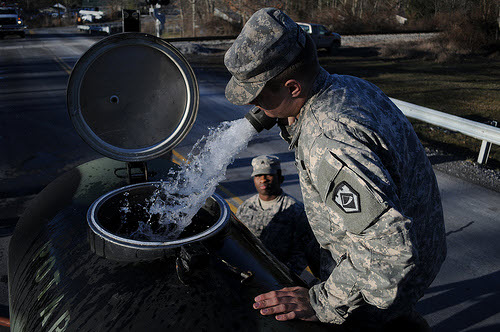 My own initial reaction to the chemical spill in West Virginia’s Elk River was likely similar to many others not in the area: “That’s terrible… I’m sure they’ll take care of it.” More specifically, that was my “individual person who feels powerless to help” response. My environmental blogger response was probably more along the line of “Damn coal companies!” (even though, of course, it wasn’t a coal company that directly created this threat to the region’s drinking water supply). Both of those fit what most would expect; neither is sufficient to helping out, though. As Sami Grove at Treehugger noted this weekend, we environmentalists have largely dropped the ball on this one.

So, yes, I’m late to this party… but despite the drop in news coverage, the threat to drinking water in Charleston and surrounding areas continues: the state’s governor, for instance, told the press just yesterday that, essentially, he can’t guarantee the safety of the water coming from WV American. Specifically, he told residents “If you do not feel comfortable drinking or cooking with this water, then use bottled water.”

Were I still 12 years old, I’d respond “Duhhh.” I’m considerably older than that, so I’d like to do what little I can to help. Unfortunately, there’s not a lot of information out there on ways to support the residents of West Virginia: I’m finding very little on the sites of environmental organizations, as well as those of traditional disaster response groups. Here’s what I have found; I will update this list if I come across other resources. Please feel free to share assistance resources for victims of this spill in the comments.