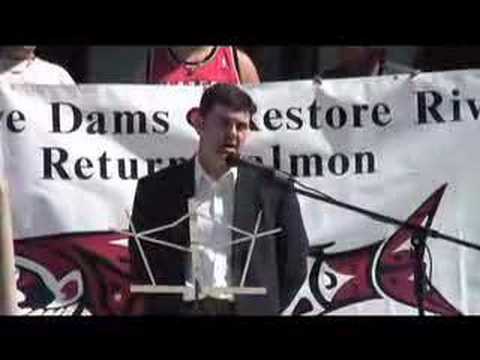 The Klamath River is sick, very sick. This once mighty river runs through the Cascade Mountain Range, from southern Oregon to northern California. In 2002, over 33,000 salmon died in a massive fish kill caused by dams on the river, as well as water diversions, agriculture, industrial pollution, mining, road building and poor forestry. In subsequent years, commercial fish seasons have been canceled and fish counts continue to be extremely low (75% lower than before the fish kill). According to the Klamath Riverkeeper,

The Klamath River, the third largest river on the west coast, was once one of the most productive salmon rivers in the country with over a million salmon returning to spawn in its waters each year. Now the Klamath River is only a shadow of its former self due to dams, diversions, agriculture, industrial pollution, mining, road building and poor forestry.

Every 50 years, the Klamath River Dams undergo relicensing, and now is the chance for dam removal. Many critics of dam removal state that the dams produce “clean,” renewable energy. Although hydroelectricity is sustainable, such as the micro hydro system that powers my home, on a massive scale it is not green. New projects are being protested worldwide. On the Klamath, algae growth caused by warm water temperatures created by the dams and diversions actually produce methane emissions, a powerful greenhouse gas.

Pacificorps, owned by Warren Buffett, owns the Klamath Dams. Dam removal is cheaper than building fish ladders, yet Pacificorp, one of the lowest-cost electricity producers in the United States, would prefer to transport migrating salmon by semi-truck around the dams. This certainly is not a clean energy solution, and the Klamath Dams are old, outdated, and inefficient. The Klamath Riverkeepers state, “The dams only provide 160mW of electricity, an amount the California Energy Commission said could be replaced with a wind farm at equal cost to upgrading the dams.”

The problems of the Klamath River are not easily solved, but there is a lot at stake. This river is vital to Native Americans in the region:

The Klamath, Karuk (upriver), Yurok (downriver), and Hoopa tribes in the Klamath Basin have cultures that are deeply connected to the land. Today these tribes and other nature dependent people in the region are suffering from loss of land and fisheries, and the loss of the traditional diet, which also affects cultural practices. However, the people of this region are very strong and are fighting for their way of life. They continue to be stewards of the forest and rivers and to lead the struggles to save the Klamath River and Klamath Salmon.

The Klamath Dams do not produce “green” energy, they produce toxic green algae!

Battle for the Klamath