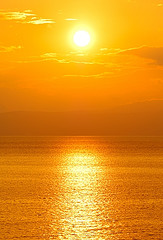 Saudi Arabia makes more than 10 million barrels of oil a day, but it may be turning an eye on a cleaner, brighter prospect: solar power.

Oil minister Ali al-Nuaimi told French media that the oil-rich nation is researching how it can become a center for solar energy research and eventually become a “major megawatt” exporter in the next 30-50 years. He also said that Saudi Arabia is ready to invest in carbon capture and storage, even developing technology to extract carbon dioxide (CO2 – a major global warming pollutant) from the atmosphere and store it underground (I’ll admit, I haven’t heard of extracting CO2 from the atmosphere before).

This all comes on the heels of an agreement last November by Gulf OPEC members to invest three-quarters of a billion dollars US to fighting global warming and financing clean technologies. But is this just an attempt to be seen as a big player in the hot solar energy field — or could the Saudi government be concerned about peak oil and increasing regulations around the world that make fossil fuel use more expensive?