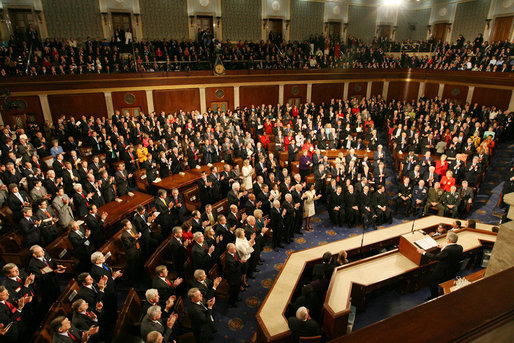 I did not ‘live blog’ the State of the Union Address last night (and no, not because I was too drunk). In fact, I didn’t watch it live at all. In an effort to take back a piece of my life lost to commercial advertisements, I have recently become a TiVo person (not the brand mind you, but TiVo works nicely as a noun and a verb). I basically got the device because I was fed up with ads interrupting the quality fake news I get from the Stewart-Colbert NewsHour. And even though the annual address is one of the few things you can watch on commercial television without ads, I chose to TiVo it and watch it a few hours later, in unreal time.

The best thing about using the device for the Address was being able >>, to >>>, or even to >>>> through the long, drawn out walk into the House Chamber. I always find all of that gladhanding a little strange, really The long walk is then punctuated by the rounds of undeserved applause (though noticeably quieter and shorter than past years). The second best thing about the TiVo was being able to << when I had to re-listen to a couple of spots for a good laugh. And I am even such a nerd that I moved the parts of the video frame-by-frame to see where Bush was looking when he delivered certain parts of his message.

Regardless of how I watched it, I came away with a general impression that many of you may also have had; this was not the same President who once boasted about his political capital and how he intended to spend it. This is now a fairly unpopular, lame duck executive presiding over a country that is, a) frustrated with the long and expensive occupation of Iraq; b) nervous about a sagging economy and possible recession, and; c) annoyed by the inordinate amount of BS that has flowed freely from this administration for the last seven years. Essentially, the speech will not be remembered for its fire, vigor, bold policy announcements or anything else really.

In terms of the ecopolitical substance of the speech, it seemed to be another tired exercise in rhetoric. The president urged support and trust of our scientists and engineers, despite his administration’s tendency to redact and adjust the parts of the science they don’t like. In terms of climate legislation, the president insisted that there should be “no free rides” for large developing economies (read: China, India). But didn’t this country enjoy a free ride of spewing GHGs since the beginning of the industrial revolution 150 years ago? Bush seemed to tout the promise of renewable energy, this coming just six weeks after his threatened veto virtually eliminated renewable energy from the energy bill.

Bush also reaffirmed his support for carbon capture and sequestration as well as nuclear power, renewable fuels and batteries. I actually wrote down in my notes, “technology, blah, blah, blah.” And, oddly enough that was before I saw a post by Joe Romm at Climate Progress that makes a similar argument in his critique of the SOTU.

Other worthy takes on the SOTU:

Other useful links and resources:

Text of the 2008 State of the Union Address

Audio of the Address and NPR Analysis