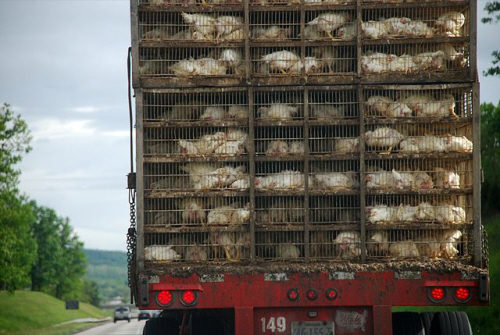 Humans have a hard time comprehending massive quantities. Our predominant evolutionary experience has left us good at small, easily graspable numbers, distances, amounts, volumes. We humans are just NOT good at scaling up.

Joseph Stalin was speaking a biological truism, then, when he said, “One death is a tragedy; one million is a statistic.” (Granted, he was a mass murderer and so could speak from experience…but still.)

It is even harder for us big-brained humans to handle both massive scales and species boundaries. However hard to really feel it sometimes, we can generally recognize the horror of a million human deaths. But ten billion annual deaths of chickens, turkeys, cows, pigs, sheep, and other non-human land animals is, according to legal protocols, “standard industry practice.” (To account for sea animals, you have to multiply that number by about five to ten…)

Statistics, when it comes to animals raised and slaughtered for food in the United States, can never shake the trail of blood that extends behind them for hundreds, indeed thousands of years. While the Industrial Revolution has as one of its children modern industrial (“factory”) farming, the beginning of this tragic tale lies further back, at the dawn of agriculture—indeed in the first clumsy moments in which humans realized their ability to influence other creatures.

Much of the United States is still agricultural land. The number of farmers has plunged precipitously, but the amount of land and number of animals “under production” are still vast. Vast beyond human comprehension.

Despite the big numbers, the awfulness of statistics is a matter of flesh and blood—an inescapable onslaught of pain, suffering, and thoughtlessness. The statistics become terrible every single day, whether we are standing in the midst of a slaughterhouse, or walking down a grocery store aisle, or watching a fast-food commercial on television.

They become terrible by becoming individuated. By becoming personal.

The Terror Next Door

Take one example: The Shenandoah Valley, where I currently live, has a long agricultural tradition, most of which is borne on the backs of living beings. Nowadays, the Valley is riddled with massive poultry processing plants owned by companies called “integrators,” which also own the chickens who are “grown” by “growers” and slaughtered and “processed” in a long assembly line of terror.

Business as usual in the “Poultry Capital” entails the death of millions of chickens and turkeys every single week. One facility looms just outside of downtown, a mile or so from my house, close to the heart of this small city of nearly 50,000 humans. Another lurks in the next town over. The first kills upwards of 600,000 birds every week; the second kills about 400,000 weekly.

To feed this machine, poultry transport trucks drive through the streets of this town, each crammed full of chickens and turkeys…hundreds of them per truck. Any single one of these trucks would overwhelm a farm sanctuary or animal rescue group if, somehow, those individuals were saved.

These trucks are rolling statistics. The processing plants are menacing, concrete, mechanized storehouses of bloody statistics.

But they are, each and every one, a tragedy. The reason—and this is what Stalin was never able to grasp—is that those million deaths in a statistic are made up of individuals. There is no other way.

Those trucks and those plants are slaughtering individual beings, each with a personality, with individual thoughts, feelings, experiences, desires, instincts, and hardships. No matter how many living beings are packed into the cages, the trucks, or the machinery, their individuality is never eradicated. Not by humans’ mad, insatiable hunger for flesh, nor by humans’ transference of the act of slaughter to a small minority, nor by humans’ mechanization of the process of birth, growth, and death.

These one million deaths, ten billion deaths, or one death are all needless tragedies, for they are the forced deaths of individuals for our consumption. Whether on an assembly line or on the family farm next door, the deaths are needless and selfish.

Statistics can never change that fact.

Facing down those statistics, which are comprised of billions upon billions of individual deaths at human hands, it is both unfathomable and unconscionable to respond in any other way than to stop eating and using and abusing non-human animals.

There is no other ethical or defensible response than to go vegan, and to advocate for the end of exploitation, consumption, and commodification of every single individual creature.

There is nowhere to hide from this fact, no matter how great the statistics.