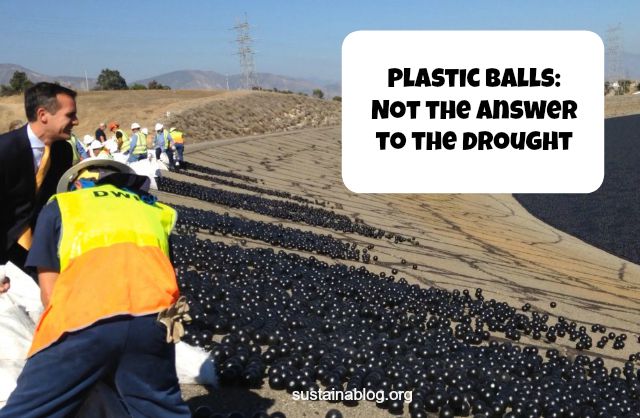 After four years of drought, you can’t be surprised if Californians try some unusual approaches to conserving water: what have they got to lose, right? So, I’m not at all surprised that the introduction of “shade balls” into the LA Reservoir a few weeks ago got a lot of attention. Mayor Garcetti even got into the act, participating in dumping 20,000 of the plastic balls:

LA just completed a project at the LA Reservoir to save 300 million gallons of water by deploying shade balls on its surface, saving our city over $250 million dollars while keeping our water clean & safe.

The idea here is three-fold: the black plastic balls keep chlorine in the water from reacting with sunlight to create bromate (a possible carcinogen), protect it from wildlife, and keep the water from evaporating by blocking sunlight. The problem: that last point – the one that ties the shade balls to drought reduction – has no evidence to support it. Reservoirs have been using shade balls for seven years for the first two purposes – successfully – but, according to LA Weekly, the water conservation angle was probably more of a play for media attention from the Mayor’s office than an actual drought solution.

Politicians do something stupid in the face of a big problem to garner attention – that’s barely headline-worthy any more. But, as our friends at Grist point out, the shade balls experiment is really wasteful. We’ve all seen plenty of evidence of what happens to plastic when it gets into water; if you need a refresher, Grist found a great overview on the blog Discard Studies. Among the consequences of introduction plastic waste to water:

Yeah, generally not things you want to encourage… unless, of course, the payoff in water savings is worth it. But that’s a really hard argument to make. Again, according to Discard Studies:

The 300 million gallons of water a year that the shade balls are supposed to capture that would otherwise evaporate is actually a small number when compared to the amount of water being used at industrial scales.* For example, the Washington Post crunched the numbers and argues that if California agriculture increased its water efficiency by only 5%, they would save 500 billion gallons of water in a few months. Fracking uses 2.14 million gallons of fresh water every day. One of the most common problems in environmental solutionism is trying to solve massive problems with tiny solutions. This is one of those cases.

So, not much of a payoff in terms of water saved. It gets even worse: LA Weekly notes that the amount of water projected to be saved by the project comes out to about $2 million. The cost of the balls themselves? $34.5 million. And we don’t know the cost of cleaning up any mess they make…

Having lived in the desert Southwest, I understand that water’s political issue… but let’s also keep the scientists in the loop, huh?