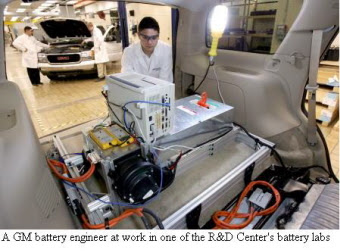 I just returned from a whirlwind trip to Detroit to attend a really interesting (and pretty unique) event: General Motors brought bloggers and journalists to their Research and Development Center outside of Detroit yesterday not to make a big announcement, or roll out a new vehicle, but to simply provide an update on the development of battery technology for the Chevy Volt and other electric concept vehicles. As the PR rep who coordinated the event told us right before the big presentation, there was really no news; rather, GM really seem to want to keep the media posted on where things stand with these new concepts that received a ton of attention in January.

Now, if you’re a skeptic, you’re probably thinking something along the lines of “Wow! Who Killed the Electric Car? must’ve really got their attention!” I think that’s accurate — at the auto shows in LA and Chicago, as well as today, company execs. discussed the EV1 project openly and frankly. Their story (and I think it’s got some merit): a two-seater with an 80-mile battery range was only going to have limited appeal, and, ultimately, not serve the purpose of really greening the American auto fleet. And that’s their real push, they claim — they want to create greener cars that have mass appeal, and fundamentally change the vehicles we drive.

Enter the Volt, which was rolled out at the Detroit Auto Show, and is getting all sorts of attention. It’s a sweet car, no doubt, but it’s also a concept vehicle at this point. That’s another area of criticism: GM does well creating green concept vehicles, but they’re not rolling off the production lines. We heard a healthy dose of that in LA from the Rainforest Action Network and JumpStartFord (now Freedom From Oil). Larry Burns, VP of Research and Development, spoke to that criticism when I talked with him in Chicago, and the company continued to respond yesterday. In short, GM has more vehicles in its fleet that average over 30 mpg than any other American auto maker. Furthermore, as CEO Rick Waggoner said in LA, and Burns told us this morning at a bloggers-only breakfast meeting, GM is committed to “reinventing the automobile.”

OK… sounds like a good line from the PR department, right? I’ve got to admit, after talking to Burns one-on-one in Chicago, and then seeing his presentation yesterday, I think we’ve got to give the company some latitude: they’re definitely thinking very big. Burns held a breakfast meeting with four bloggers: Ed Ring of ecoworld, David Houle of Evolution Shift, Sam Abuelsamid of AutoblogGreen, and myself. The thrust of his talk: we’re facing big challenges in terms of energy security, climate change and global political instability, and that requires a fundamental rethinking of the automobile. Burns noted that the “DNA” of the car hasn’t really changed in 120 years: it contains an internal combustion engine powered by petroleum products, is driven by mechanical systems, and functions independent of other vehicles on the road. GM wants to change those factors: create a vehicle powered by electricity and/or renewable fuels, driven by electronic systems, and connected (via communications technologies) to other vehicles on the road (think accident avoidance, among other things).

This fundamental shift is encapsulated in a concept introduced by GM CEO Rick Waggoner at the Detroit Auto Show: E-Flex. According to Waggoner,

What exactly do we mean by E-Flex? Well, the “E” is no surprise – it stands for “electric,” because no matter how an E-Flex vehicle is configured, it will always be driven exclusively by electricity.

This is the major difference between E-Flex and hybrids. Hybrids can be driven by an internal combustion engine, or an electric drive, or both systems simultaneously. E-Flex vehicles will always be driven by electricity.

What about the second half of the name? Well, that’s the really interesting part of all this. E-Flex is “flexible” because the electricity it uses to drive the vehicle can come from a wide range of fuel sources. It can come from a hydrogen fuel cell; it can be generated by a small motor running on ethanol or bio-diesel or synthetic fuel; or it can come from the power grid, and be stored in a battery. And, when the electricity comes from the grid, it can be generated by natural gas, coal, nuclear power, wind, hydroelectric, and so on.

In short, E-Flex vehicles will enjoy one of the really outstanding benefits of electricity: the opportunity to diversify fuel sources for the vehicle.

E-Flex is also flexible because it offers flexibility around the globe. Europeans rely more on diesel fuel than North Americans, Brazil has gravitated to E-100 ethanol, and we see tremendous opportunities with bio-fuels here in the U.S. China, meanwhile, may well be the first country to develop a broad-based fuel cell infrastructure.

By setting up a propulsion system that allows us to power vehicles with any of these fuels, E-Flex provides us with a single elegant solution.

In short, E-Flex creates options. It’ll allow GM to leverage a range of electrically driven propulsion systems, as well as benefit from the inevitability and the promise of energy diversity.

The concept is really innovative: essentially, GM wants to take the concept of energy diversity, which we’ve heard much about in the context of electricity production by utilities, and adapt it to the automobile. Rather than creating vehicles based on the assumption that gasoline is the almost universal fuel of choice, E-Flex allows for diversity based on local and regional difference.

Of course, this thinking presents unique challenges. The biggest ones: development of next-generation battery technology, particularly lithium ion batteries for automobiles. This, the company claims, is the main challenge they’ll have to overcome before moving the Volt, as well as the Sequel, to production status. They say, though, that they’re fully committed to developing this technology, and that, while no firm dates were given, they foresee these vehicles on the road within a 3-5 year time frame.

Too good to be true? That claim was made, with at least one reporter in the battery briefing characterizing the company as having a history of overpromising and underdelivering. In my next post, I’ll get into the battery development plans, as well as alternatives that were suggested over and over.

I do think GM is very serious about reinventing the automobile, and that their ideas are much bigger than anything we’re hearing from the remaining two companies of the “Big 3.” They’ve provided a pretty specific blueprint for how they’ll do that. And, while they don’t have firm dates (that probably would be overpromising), they’ve argued that such developments can happen in a relatively quick time frame. The one question that remains to be answered (and the one that you can help with): how will the public react to this news? Are we willing to give the company the time it needs to make such dramatic changes? Or, has their moment passed? I’m tending towards the former: GM’s certainly made its mistakes, but if these plans succeed, we’re looking at a revolution in personal transportation…

Disclaimer: GM did cover my expenses for this trip. As with my trip to the Chicago Auto Show, this was done with the understanding that I was free to write (or not to write) whatever I chose…