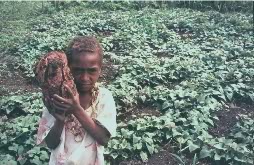 Of course, I’m talking about biofuel — what were you thinking? Anyway, biopact takes note of the planned development of a integrated biogas-ethanol plant in the African South American nation of Guyana that would use sweet potatoes, cassava and rice residue as the feedstock for a number of products, including biomass for electricity generation. The plant requires an investment of $140 million, and would create, in addition to ethanol:

The blog post that serves as my source is a little sketchy on who’s building this, but I’m guessing it’s Canada-based Guyanese company Anand Marketing (their president is quoted in the article). I’d imagine some real economic benefits could come from such a development, but two things make me scratch my head just a bit: 1) can countries like Guyana afford to devote cropland and the food it produces to ethanol production, and 2) why does the US need to outsource this production to Africa (the ethanol will be sold in the US market)? I think there are many, many types of sustainable development that could benefit the developing world, but I’ve got to wonder if this is one of them… Still, if many of these products are used in Guyana, I’d imagine many would find real benefit in them.