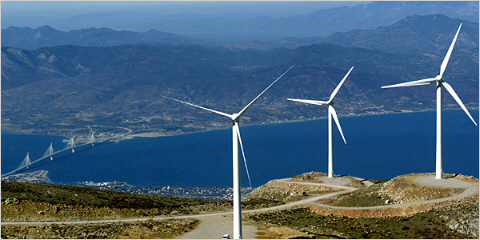 Just a few days into my six-day stay on the Greek island of Paros this summer, I was amazed that I hadn’t yet seen a single wind turbine or solar array. The wind blew constantly, and I literally didn’t see a cloud in the sky the whole time I was there. I was mystified that this tiny island, and those surrounding it, weren’t (as far as I could tell) taking advantage of the abundant clear energy sources available to them. A conversation with Greenpeace International’s executive director Gerd Leipold confirmed my suspicions: not only were the Greek islands not taking advantage of these resources, but there was an organized resistance to proposals to bring wind turbines to them. Leipold told me also that another coal-fired power plant was in the works to produce electricity.

The Travel section of today’s New York Times delves into this issue a bit more deeply, and notes that Greece’s total wind power development, about 800 megawatts, is well behind other European countries. Furthermore, electricity production comes largely from burning brown coal, or lignite, which, according to the Department of Energy, is the lowest grade of coal; it also creates more CO2 emissions than other forms of coal burning. Writer Joanna Kakissis notes that Greeks have good reasons to be alarmed at this reliance on lignite as a primary power source:

Scientists say Greece faces dire consequences from climate change and must adopt renewable energy sources. The tinderbox conditions that helped spread last summer’s fires in the Peloponnesus were a result of drought and heat waves, which some experts say were caused by climate change.

“If the climate gets worse here, tourists will vanish and not come back,” said Nikos Charalambidis, director of Greenpeace Greece.

With tourism accounting for 16% of the country’s GDP, that’s a real concern. But, as Kakissis notes, tourism is the reason often given for not shifting to wind power: Angeliki Synodinou, the mayor of the island of Serifos, for instance, has opposed a wind project there, claiming “No one would come here… Our island would be destroyed.”

As we’ve seen here in the US, the arguments against wind power in the Greek isles largely comes down to aesthetics and noise concerns — all others have been largely disproven. Claims that turbines would drive away tourists seem far-fetched at best, and just haven’t proven true in other places. In Greece itself, a “41-turbine wind park on Panachaiko Mountain near the northern Peloponnesian city of Patras has even become a much-photographed landmark, [Ioannis Tsipouridis of the Hellenic Wind Energy Association] said.” In other parts of Europe, carefully sited turbines co-exist with tourist attractions and even environmentally sensitive areas.

Wind energy opponents are a pretty stubborn lot, and I doubt anyone will convince them that wind turbines in the Greek islands would ultimately benefits residents and tourists. Given the most likely alternative of more coal power, it’s a little hard to understand their thinking. As much of that coal likely has to be shipped to at least some islands, it’s hard to imagine that wind wouldn’t be a more cost-effective option in the long run.