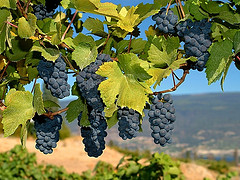 Last week, 350 wine makers and scientists from around the globe discussed how global warming is effecting their wines and how they can adjust their productions to emit less emissions themselves. Carbon sequestration was a hot topic, whereby carbon dioxide (CO2, a major contributor to global warming) is captured and stored underground, instead of letting it escape up into the atmosphere.

One admirable entrepreneur explained how he’s trying sequestering the CO2 himself:

At the foot of the Cordilleras of the Andes in Chile, Torres has already set up the first recovery process for the CO2 produced by fermenting grapes, he said.

“We are trying to convert CO2 into something solid, which will remain in the ground, instead of being emitted into the air,” he said.

If the Chile project — which Torres admits is still a small pilot experiment — is successful, he intends to implement a much bigger programme in Spain, with co-financing from the regional government of Catalonia.

Harvest season is already ten days earlier in most wine regions, and scientists reported that global warming would likely lead to “harder” and less aromatic wines. In Spain, some vines have been moved to higher and cooler areas or further inland. But some countries, like New Zealand or the UK, could start producing a wider variety of wines than their cooler climes allowed before.