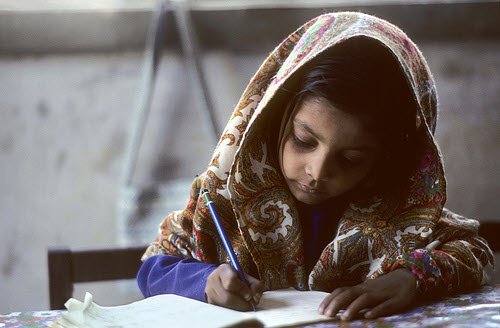 Earlier this month President Clinton’s Global Initiative University visited my adopted city of Saint Louis to bring together world leaders and students in hopes of creating a movement against global issues like public health, poverty, hunger, etc. As I browsed through the webcasts of the weekend’s events, one really touched my heart– young girls and women being empowered through education. Maybe I’m biased towards this topic because I’m a woman who’s also a mother or simply because I think every person, both men and women, should have an opportunity to control the outcome of their futures.

As shared in the video of this session, “this isn’t a gender issue, but a choice issue” affecting us all. Research overwhelmingly shows if more women are educated, countries experience greater economic growth, lower infant and child mortality rates, and declines in the spread of HIV/AIDS infections, among other benefits. Some have even argued that educated women are the key component in slowing the effects of global climate change; now that’s a cause worthy of having everyone’s attention!

“Your Future is in Your Pocket”: Technology Helps Women Overcome Social Barriers

As part of the “A Future for Girls and Women: Empowering the Next Generation” event, a panel of humanitarian superstars shared their experiences in and hopes for helping women become more independent. Chelsea Clinton moderated the discussion including Hawa Abdi Diblawe of the Dr. Hawa Abdi Foundation, President and Chief Commercial Officer of Dell, Inc., Stephen Felice, Muhammad Yunus of the Yunus Centre, and Shabana Basij-Rasikh of School of Leadership Afghanistan (SOLA).

Dr. Hawa explained that advancements in technology have enabled a Somali phone carrier to help women in her community to control how their money is spent by using mobile phones to conduct financial and credit transactions. Her foundation provides housing, food, medical care and education to over 90,000 Somalis fleeing violence of the civil war.

Professor Yunus, also known as a “Banker to the Poor”, supported Dr. Hawa’s sentiments because his Grameen Bank gives loans to millions of Bangladesh women to help them start their businesses, something once uncustomary in his village. Some women also are given mobile phones, which in turn gives them a voice in community and government dealings.

SOLA’s co-founder, Shabana, added to the discussion saying the Internet has helped her students to be in charge of the information they receive and to become more self-expressive through their social media and blog postings. They also have email accounts and mentorships via the Web. These resources have empowered more Afghan women to attend universities despite sexism from their own communities and families.

Following this same idea, Stephen of Dell, Inc. said his company’s Women’s Entrepreneur Network brings together women from all over the world hoping to be successful business owners. Participants create a supportive environment to share ideas and strategies through social media and other websites.

The mutual feeling of the panelists was one of technology uniting the world as one village with the power to take action against global issues such as this one. But you don’t have to take my word on it, you can check out the full video for yourself.