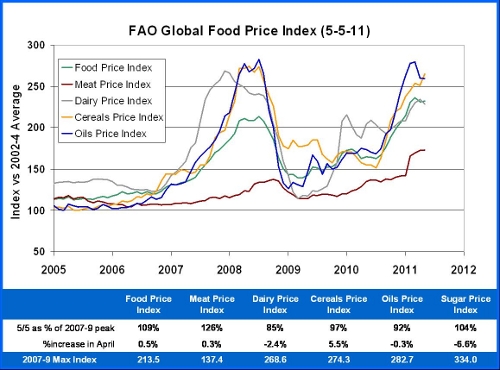 The FAO (Food and Agriculture Organization of the UN) released their global food price index data today showing what happened in April.  Last month there had been a glimmer of hope that the upward price trend was reversing, but as many predicted that was not a trend that continued.  Dairy, Oil and Sugar prices on the international markets did continue down a bit, but meat and cereals prices continued to rise as did the overall index.  The biggest increase was cereals (5.5% April over March).  This is bad news for poor, grain import-dependent countries in Africa and the Middle East.  Europe and Japan are also very dependent on grain imports, but they can afford this.

What Is Going On?

The Farm press has been full of articles about high grain prices and the efforts of farmers to boost supplies.  There have been major planting delays for the US 2011 crop season because of a wet spring.  That reduces final yields.  Growers are also getting advice about using fungicides this year to protect their yields from diseases like Head Scab.  India is said to be considering a ban on wheat exports to protect domestic supply/price.

The Real Concern Is About Wheat

The FAO site says that rice supplies are strong, so the big factor in the cereals index is wheat.  This is much more than a short term worry.  It is estimated that global wheat trade (already huge) will double by 2050.  This is because most of the remaining expected increase in human population is in places like Sub-Saharan Africa where wheat cannot be grown.  It will fall to places like the US, Canada, Australia and Argentina to produce that food.  That is why the wheat industry is working hard to prepare their customers and consumers for the need to enhance wheat with biotechnology.  Whether that will happen in time is doubtful, particularly if groups like Greenpeace have their way.

In the midst of a cereal price spike and with a looming long-term supply question, our “representatives” have cut the funding for a very important wheat breeding program based at Kansas State that had a critical global mission.  But the tax benefits for the rich and the oil companies were “saved!”  It is a sad thing to watch something to watch the global wheat supply being compromised by the thought-free budget process in the US Congress.

These developments come in a week when one great enemy of world peace has been eliminated.  But it would do us well to consider these words of Norm Borlaug:

If you desire peace, cultivate justice, but at the same time cultivate the fields to produce more bread; otherwise there will be no peace

You are welcome to comment on this site or to email me at savage.sd@gmail.com.  I can also provide higher resolution versions of the chart.  My website is Applied Mythology.

Want to go vegetarian or vegan… but still like meat? Try one of our meat substitutes, including TVP and veggie burgers and Quorn meatless meats.