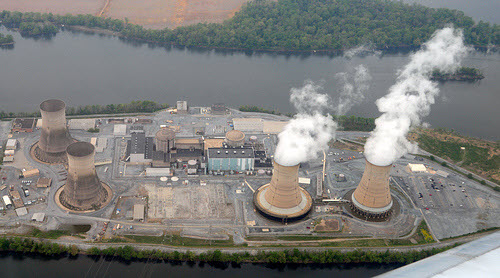 World nuclear electricity-generating capacity has been essentially flat since 2007 and is likely to fall as plants retire faster than new ones are built. In fact, the actual electricity generated at nuclear power plants fell 5 percent between 2006 and 2011.

In 2011, following Japan’s Fukushima Daiichi nuclear disaster, 13 nuclear reactors in Japan, Germany, and the United Kingdom were permanently taken offline. Seven new reactors, three of them in China, were connected to the grid.  The net result was a two percent reduction in world nuclear capacity to 369,000 megawatts by the end of 2011. In 2012, the world has added a net 3,000 megawatts of nuclear capacity, with new additions in South Korea and Canada partly offset by more U.K. shutdowns. The United States, with 104 nuclear reactors generating some 19 percent of the country’s electricity, leads the world in nuclear generating capacity. France is a distant second in installed capacity, but its 58 reactors meet more than three quarters of the country’s electricity demand. (President François Hollande has pledged to reduce this dependence to 50 percent by 2025.) China, Russia, South Korea, and India account for 48 of the 64 nuclear reactors the International Atomic Energy Agency lists as under construction worldwide. Although these 64 reactors add up to some 62,000 megawatts of potential new capacity, fewer than one in four has a projected date for connecting to the electrical grid. Some reactors have been listed as “under construction” for over two decades. Plagued by cost overruns, construction delays, and a dearth of private investment interest, the world’s nuclear reactor fleet is aging quickly as new reactor connections struggle to keep up with retirements. The average age of nuclear reactors operating today is 27 years; the 142 reactors that have already retired were just 23 years old on average when they closed. Many nuclear reactors have been granted operating extensions, usually for 20 years, beyond their typical design lifetime of 40 years. But since Fukushima, where the four retired reactors averaged 37 years in operation, this option has become less attractive. In contrast to the decline in nuclear power, electricity generation from the wind and the sun has grown 27 percent and 62 percent, respectively, per year since 2006. Four German states now get close to half of their electricity from wind. By 2015, China plans to increase its current estimated 60,000 megawatts of grid-connected wind power capacity to 100,000 megawatts. More solar photovoltaic capacity was added in the European Union in 2011 than any other source of electricity generation. The list of exciting developments in renewable energy goes on. As this story unfolds, it is becoming increasingly clear that we can design an energy economy that is at once low-carbon and low-risk.

For further information on the prospects for nuclear energy, see “Fukushima Meltdown Hastens Decline of Nuclear Power,” at www.earth-policy.org.