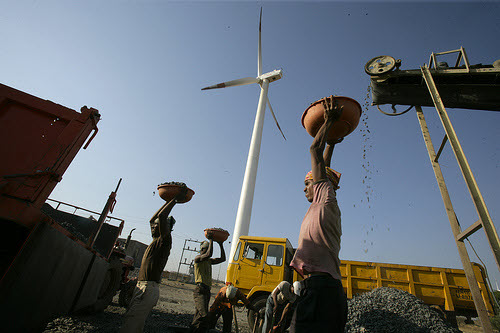 At the end of 2013, the wind farms installed in more than 85 countries had a combined generating capacity of 318,000 megawatts, which would be enough to meet the residential electricity needs of the European Union’s 506 million people. New data from the Global Wind Energy Council show that wind developers built 35,000 megawatts of new generating capacity worldwide in 2013. This was down from 45,000 megawatts installed in 2012—marking only the second time in 25 years that installed capacity increased by less than it did the year before. The principal reason for the decline in new capacity was a more than 90 percent drop in U.S. wind farm installations from a record 13,000 megawatts in 2012. Although the United States has the second-highest wind power capacity in the world—some 61,000 megawatts—a lack of long-term policy planning has led to several such boom-and-bust cycles.

US Wind Power 2013: Some Bright Spots

Despite the dearth of new capacity, there were many bright spots for U.S. wind power in 2013. Wind accounted for at least 12 percent of the electricity generated in nine states, including Iowa (27 percent) and South Dakota (26 percent). Iowa will get another boost from a $1.9 billion deal announced in December 2013: Warren Buffett’s MidAmerican Energy Company purchased Siemens turbines totaling more than 1,000 megawatts, all destined for Iowa wind projects. When complete in 2015, these wind farms will likely bring the wind share of electricity in Iowa to at least 33 percent.

Wind’s contribution to the grid is also growing in Texas, the U.S. wind capacity leader with 12,400 megawatts. The Electric Reliability Council of Texas reports that wind farms produced nearly 10 percent of the electricity delivered to its 24 million customers in 2013. And with the early-2014 completion of state-funded transmission projects linking windy West Texas and the Panhandle to population centers to the east, Texas can accommodate even more clean electricity on the grid. The state has 7,000 megawatts of new wind power capacity under construction, more than half of the 12,000 megawatts currently being built nationwide.

China has led the world in installed capacity since surpassing the United States in 2010. In contrast to the drop in U.S. installations in 2013, China’s wind construction accelerated—adding 16,000 megawatts to reach a total 91,000 megawatts. Wind further solidified its role as the number three electricity source in China (behind coal and hydropower), out-generating nuclear power by an impressive 22 percent. The National Energy Administration aims to make wind-generated electricity cost-competitive with coal by 2020. (See data.) As in Texas and many other places around the world, some of China’s best wind resources are found far from major cities where electricity demand is high. High-voltage transmission lines now under construction will connect wind-rich provinces in the north and west with more populous ones in the central and eastern provinces. For example, one project linking remote Xinjiang province to the 4 million people in Zhengzhou, the capital of Henan province, was completed in early 2014. Infrastructure projects such as this one will be critical in reaching the official Chinese goal of 200,000 megawatts of grid-connected wind capacity by 2020.

India, the country with the fifth-highest amount of installed capacity, added 1,700 megawatts in 2013 to cross the 20,000 megawatt threshold. Although this was 25 percent less new capacity than in 2012, India is poised to grow its wind power base dramatically in the coming years. In January 2014, the government announced a National Wind Energy Mission—in the spirit of the country’s National Solar Mission—to be launched mid-year. By beefing up the grid and using incentives to attract investment to wind hotspots, the program aims to hit 100,000 megawatts of wind within eight years.

Development is picking up elsewhere in Asia as well. In Pakistan, wind power capacity doubled to 100 megawatts in 2013 and will double again when two 50-megawatt projects go online in 2014. Thailand also doubled its wind capacity in 2013, reaching 220 megawatts. And the Philippines has seven projects due for completion in 2014 that will expand wind capacity there 13-fold to 450 megawatts.

Before China’s recent surge, Europe was the leading wind power region. Germany, which added 3,200 megawatts in 2013, ranks third worldwide in total capacity, with 34,000 megawatts. Four of its northern states regularly get half or more of their electricity from wind farms. When it comes to wind’s contribution to national electricity needs, European countries top the leaderboard. Denmark gets one third of its electricity from wind, well on its way to a target of 50 percent by 2020. Portugal, Lithuania, Spain, and Ireland come in at around 20 percent each. In fact, wind came within a percentage point of beating nuclear power for the title of Spain’s number one electricity source in 2013. And Germany, Europe’s largest economy, obtained 8 percent of its electricity from wind farms.

While some of the larger European wind power markets, including Spain, Italy, and France, have slowed down, smaller players are speeding up. Poland and Romania each expanded their wind power capacity by 36 percent in 2013, to 3,400 and 2,600 megawatts, respectively. And in Turkey, even though the approval process for projects is slow, wind capacity grew by 28 percent to nearly 3,000 megawatts.

One region with enormous wind potential but little development so far is Latin America. Brazil, best known for getting 80 percent of its electricity from large hydropower, hosts the most wind power capacity in the region—now close to 3,500 megawatts after a 950-megawatt addition in 2013. At government auctions, wind companies have won more than half of all contracts to sell electricity since 2011, according to Bloomberg data. Some 10,000 megawatts of wind may be installed in Brazil between 2014 and 2019. Mexico, Chile, Argentina, and Uruguay also added wind power in 2013.

In all of Africa, just one project added capacity in 2013. The final 90 megawatts of Ethiopia’s 120-megawatt Ashegoda Wind Farm went into operation, more than doubling the country’s wind capacity to 170 megawatts. South Africa has 2,100 megawatts of wind power in the pipeline, including 750 megawatts to be added in 2014 alone.

Offshore projects account for just over 2 percent of the wind capacity installed worldwide. Having hit a seventh straight annual installation record in 2013, however, offshore wind is growing fast. More than half of the 7,100 megawatts of offshore capacity belongs to the United Kingdom, which installed 730 megawatts in its waters in 2013. Denmark, Germany, and Belgium each added at least 190 megawatts to their totals, while China added 39 megawatts. Both Vietnam and Spain added offshore wind capacity for the first time, as did the United States, although the U.S. project was one very small demonstration turbine off the coast of Maine. Offshore wind is still one of the more expensive electricity generating technologies, but onshore wind is often highly competitive with coal, natural gas, and nuclear power in areas with strong wind resources. And costs continue to fall as wind manufacturers steadily improve turbine efficiency, harnessing more wind per machine. In the United States, the average price of wind-generated electricity has dropped 40 percent since 2009.

After a slower year in 2013, world wind installations will bounce back in 2014, perhaps to a new record—the Global Wind Energy Council sees the potential for 47,000 megawatts. Roughly half of the total will be built in China and the United States (around three times more in the former than in the latter). This is good news for the wind business, for electricity consumers, and for people who value cleaner air and water. But increasingly dire scientific warnings about the consequences of climate change mean that the world will need to accelerate the shift to carbon-free, renewable sources of energy even more so in the years to come.

For a plan to stabilize the Earth’s climate, see “Time for Plan B.” Data and additional resources available at www.earth-policy.org.