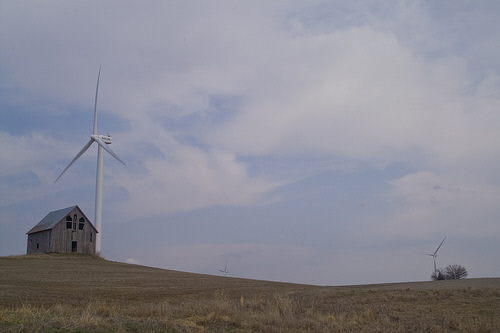 Despite the availability of clean and sustainable energy sources like solar, wind, hydropower, geothermal and biomass, many states depend on outdated and dirty energy sources. Ohio, Pennsylvania, Indiana, Missouri and Tennessee are among the most in need of an energy portfolio diversification. The Natural Resources Defense Council (NRDC) has identified solutions for these and other states.

According to data compiled by 24/7 Wall Street for all 50 states from 2009-2010, Ohio ranked fifth in the nation for energy used, with less than 1 percent coming from renewable resources. Most of the state’s energy is produced by burning coal, which creates pollution, including 267 million metric tons of carbon dioxide emissions from fuel combustion.

The NRDC suggests that Ohio is ripe for implementation of wind, biomass, solar and biogas energy solutions. Wind energy production would be fruitful along the shores of Lake Erie and in the northwestern part of the state. Biomass from crop waste, yard waste, pallets and other wood materials is produced in large quantities in Ohio, but most of that ends up in landfills instead of providing a potential 14 million kilowatt hours every year.

Despite Ohio being a hub of solar panel infrastructure production and getting three to four kilowatt-hours of solar energy per square meter daily, solar panels have yet to take root as a viable power source. The state has set an expectation that utility companies generate a minimum of 0.5 percent of their energy from solar power by 2025. Ohio’s farms—over 75,000 of them—could capture bio-gas from livestock manure by using bio-digesters with a potential for 165 million kilowatt hours annually. That’s enough energy to power nearly 14,000 homes per year.

Like its neighbor Ohio, Pennsylvania relies on coal, which is mined and used throughout the state. This leads to 274 million metric tons of carbon dioxide emissions annually, according to 24/7 Wall Street. It has the second largest nuclear power fleet in the country.

According to the NRDC, Pennsylvania could capitalize on biomass and biogas. It could cash in on cellulosic ethanol, widely considered the biofuel of the future, by growing certain crops and collecting agricultural and wood waste. Dairy farms present an opportunity for the state to harness cleaner energy and for farmers to reap additional financial benefits from their operations.

On a positive note, solar power has taken hold in Pennsylvania, and more implementation small- and large-scale is expected. One notable example is the Pocono Raceway, home to a 25-acre, 3-megawatt solar array that produces enough energy for the facility and nearly 1,000 homes. Wind is being harnessed in the Appalachian region, and the state has plenty more expansion possibilities.

Ninety-five percent of electricity in Indiana is produced by coal-fired power plants, and about half the coal used is sourced in state. The state has some of the dirtiest power in the nation and, like Ohio, only sources 0.7 percent of energy from alternative sources, according to 24/7 Wall Street.

Some wind farms are installed in Indiana, the first opening in Benton County in 2008. Most of the wind development is taking place in the western part of the state, according to the NRDC’s renewable energy map.

The southern part of the state gets four and a half hours or more of direct sun daily, making it a good region for domestic and utility-scale solar panels. Indiana is in the top five states for swine farming. The AgSTAR program, part of the EPA, estimated that the nearly 300 farms have potential to profit from bio-digesters and could generate nearly 300,000 megawatt hours of energy annually while simultaneously cutting methane emissions by 31,000 tons.

Missouri imports most of its energy resources. Eighty-two percent of its electricity is derived from coal, almost all of which is imported from Wyoming, 24/7 Wall Street reports.

The NRDC asserts that Missouri is in a position to become a national leader in renewable energy because of the fertile soil and large tracts of wind and available land. Wind, biogas and biomass energy could be adopted to reduce its reliance on imported coal.

The National Renewable Energy Laboratory estimates Missouri’s wind capture potential at 275,000 megawatts annually, which could easily power the entire state. As an added bonus, many of the windy tracts are near urban areas, which would keep the cost of energy transmission low. If current levels of crop waste were used to produce biogas, 500 million gallons of cellulosic ethanol could be produced every year. Energy crops could produce even more biogas. Like Indiana, Missouri is a top five state for swine farming. The AgSTAR program estimates that 154 farms could produce 301,000 megawatt hours of electricity annually.

Tennessee uses hydroelectric power with coal and nuclear power to keep the lights on for its residents, who use more electricity per capita than any other state, according to the NRDC. There is significant room for growth in the use of solar, biomass and wind energy in Tennessee.

The majority of solar installations in Tennessee are at solar farms or large-scale corporate installations in response to a $23.5 million Solar Opportunity Fund, the NRDC reports. Tennessee has the potential to produce billions of gallons of cellulosic ethanol by using 4.5 million acres of land identified by the Oak Ridge National Laboratory as ideal for energy crop cultivation. Tennessee could expand on its use of wind energy; one installation in Anderson County produces nearly 30 megawatts from 18 turbines.

Arizona has made excellent use of solar power. Solar panels are frequently found on single family homes and commercial properties. According to utility company APS, the Solana Generating Station solar power plant in Gila Bend, Ariz. will produce enough energy to serve 70,000 customers when operating at full capacity and will not emit greenhouse gases. The plant, scheduled to open in 2013, will provide the utility company with more solar electricity per customer than anywhere in the U.S. Gila Bend, a small town about 70 miles southwest of Phoenix, is home to three similar facilities.

In Niagara Falls, N.Y., hydropower has been successfully harnessed since 1881. In 1961 the hydropower facility began producing clean, low-cost and carbon-free power. The New York Power Authority cites Niagara as the biggest electricity producer in the state, generating 2.4 million kilowatts a year. Hydropower in New York is not without challenges. Partnerships have been developed to prevent ice build up upriver of the dam, which would impede power production and could cause flooding of shoreline properties.

Even the five “worst” states in terms of renewable energy adoption are moving in the right direction by looking at alternative sources that are better for the planet and cost little to run. Some states, like Arizona, New York and California are ahead of the curve and will set precedents.