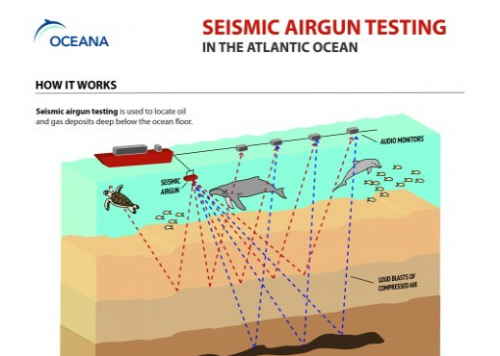 Several years ago, geologists and environmentalists went head-to-head over the use of seismic airgun testing as a means for earthquake prediction. The enviros claimed that the technology was harmful to dolphin and whale populations, while geologists argued back that the use of airguns was preferable to other testing methods… and definitely a better option than suffering through an earthquake completely unprepared.

That argument seems like one worth having: we need to work to find a way to protect marine species and gather information that could protect human communities from disaster. But what if those airguns weren’t being used for safety issues, but for oil and gas exploration? And what if the marine life potentially harmed wasn’t just whales and dolphins, but also commercially valuable fish species? That strikes me as a much more lopsided argument, with the opponents of seismic airgun testing having the upper hand.

Judge for yourself, though: Oceana published the infographic below to illustrate the big picture surrounding this form of geological testing (and has also taken a look at some of the potential impacts). Let us know what you think – what kinds of sacrifices are we prepared to make to expand oil and gas drilling?

Click on the image to get a larger version of it.