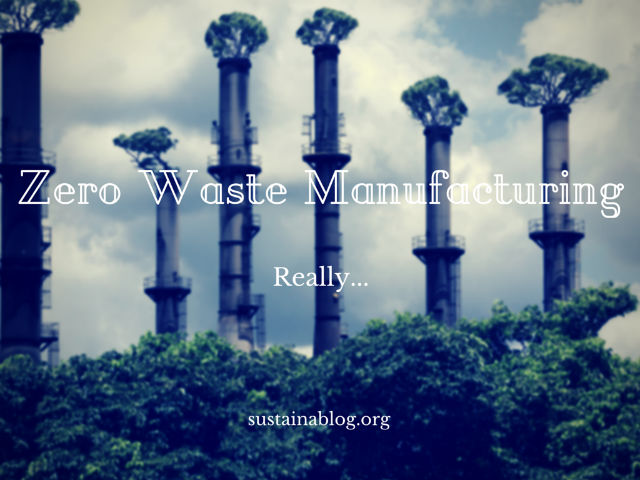 Now that we’re focusing on waste issues here at sustainablog, I’ve had to tune my radar to “wastewashing”: claims about waste reduction by companies that are accurate, but don’t necessarily tell the whole story. The phrase “zero waste,” for instance, gets tossed around a lot in the corporate space. I think it’s a laudable goal, especially for manufacturers, but I also realize it’s a phrase that can get twisted in ways to conceal as much as it reveals. So, for instance, when I went back to this post on Ford Canada’s waste reduction milestones, I realized that they were very careful to use the phrase “zero waste to landfill,” and made a quick reference to waste to energy efforts as a part of these efforts. Nothing wrong with anything there… but, a quick watch of that video will show that they’re definitely foregrounding certain facts while minimizing others. Those communication choices are what bring out the “greenwash” chanters (who are also often guilty of choosing what they push to the front in their communications).

So, I had my radar turned on when I dug into the portions of SC Johnson’s 2014 sustainability report that focused on waste reduction efforts. And there it was again: “zero waste.” Turn up the wastewash detector… quick!

Truthfully, though, I’m liking what I see from the Wisconsin-based cleaning products company on this front. Yes, they foreground their locations that have achieved zero waste status. Interestingly enough, the asterisk attached to this phrase leads to information that strengthens their position (not what you expect with those teeny-tiny footnotes in corporate reports). SC Johnson defines zero waste in a manner consistent with the larger philosophy: not only keeping materials out of landfills, but also out of incinerators. That’s key: while waste-to-energy efforts can be cleaner than other energy choices, they often aren’t: burning trash, on its own, isn’t “green.”

With that, the numbers they share from their manufacturing locations are that much more impressive: eight sites around the world have achieved zero waste status. Two of these facilities are in China; others are in Brazil, Pakistan, the Netherlands, the U.S., Poland and Canada. Overall, the company has beat its own goal of 70 percent global waste reduction from 2000; it’s hit 71 percent!

One of the things I like most about this story: SC Johnson is willing to listen to the people on the ground in these locations in order to figure out how to best reuse and recycle materials. According to the report,

At our Shanghai, China, facility, employees have identified several solutions to reduce waste after analyzing the makeup of containers and labels along with delivery alternatives… Our facility in Mijdrecht, the Netherlands, has been a zero landfill* site for over a decade. There, employees, along with a sorting robot, ensure that waste and packaging materials are separated throughout the manufacturing process to be reused or recycled. The site recycled 730 tons of its waste in 2013.

Aim for the highest standards, and listen to the people closest to the challenge… you leave yourself with little you need to explain away. No doubt a company in the cleaning products business still has a host of environmental challenges to tackle, but I see impressive strides on the waste front (as well as others). Take a look at the sustainability report, and share your own evaluation.