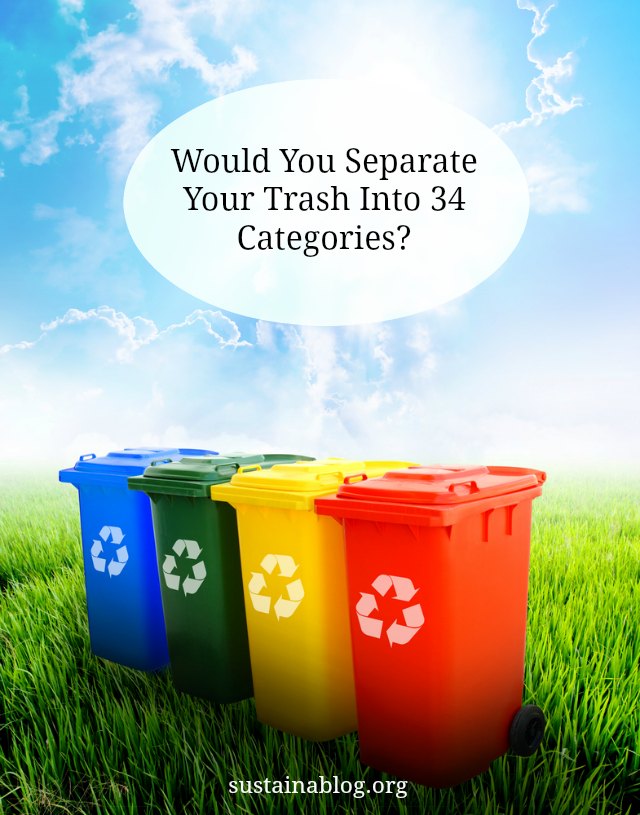 The small Japanese town of Kamikatsu has been getting a lot of love this month because of a short documentary from the Seeker Network (which you can watch above). This community of 1,700 decided in 2003 to give up its practice of open incineration of trash, and to aim for zero waste by 2020. They’re on the right track, having reached an 80% rate of reuse, recycling, or composting.

That’s impressive in just about any context, and the citizens of Kamikatsu definitely deserve recognition to a cleaner, healthier environment. But, I honestly have to wonder: could this model really be replicated? Especially in the United States?

A massive effort to recycle is at the heart of the Kamikatsu approach: residents separate their waste into 34 categories, and wash everything well before taking it to the town’s recycling center. That’s right: 34 categories of recyclable materials. Can you imagine telling the average American suburbanite that they have to do this? And wash it all first? I see recycling rates nosediving from their already low levels.

The details of the recycling system really aren’t the big problem in my mind; rather, it’s the focus on recycling itself. Yes, reuse plays into the Kamikatsu model, but recycling is no doubt the key to those impressive rates of recovery. I saw nothing in the video about efforts at reduction: encouraging methods of consumption that don’t create the same levels of waste. And reuse is clearly a ways down the priority list.

I’ll say it again: “reduce, reuse, recycle” isn’t just a nice use of alliteration; it’s also a hierarchy. And while I’ve got nothing against recycling – I frequently encourage it – I think prioritizing it stems mostly from wanting to maintain consumption practices like single servings and one-time-use packaging. Yep, all of that’s convenient, but it creates a lot of trash that may or may not be recyclable.

Of course, the residents of this Japanese town note that they’ve become accustomed to the activity necessary to achieve this remarkable reduction in landfill-bound waste. And I’d guess the challenge of having to separate and prepare recyclables in this manner may lead to more sustainable consumption practices: there may be a reduction of waste occurring because of all the activity required to recycle. I don’t want to bash on what Kamikatsu’s doing; I do question whether it could happen in other places.

Think I’m wrong? Tell me… and share any other thoughts you have on this effort to reach zero waste.