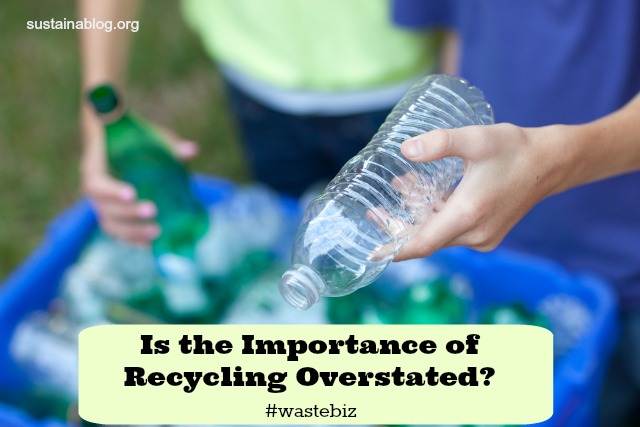 Most weeks, I have to take a look at a number of stories/events, and decide what’s most important for our weekly Waste Biz round-up. This week, the challenge was significantly less difficult: John Tierney’s NYT op-ed from last Sunday, “The Reign of Recycling,” generated a lot of discussion around the web. If you didn’t read Tierney’s piece (or don’t want to), the “too long/didn’t read” version is that we recycle more because it gives us a sense of moral superiority rather than creating economic and environmental benefits. Beyond cardboard, and some paper, metals, and plastics, Tierney argues, we tend to overstate the importance of recycling.

As you might imagine, that drew some ire. A number of respondents pointed to Tierney’s ideological leanings – he identifies as a libertarian – as clouding the facts he presents. Others argued that his facts are just plain wrong. From my own perspective, one of the biggest problems I see with his argument (as well as those of many recycling proponents) is that he considers the concept outside of the larger “reduce, reuse, recycle” framework. I do think recycling gets oversold in many cases, but sending materials to the landfill isn’t the only other alternative (as Tierney seems to suggest). More stringent life cycle analysis that internalizes all costs would give us a much better picture of both economic and environmental realities. Encouraging design for reuse would also help.  But this isn’t an either/or proposition, as Tierney’s piece suggest.

Among the better responses to Tierney’s editorial that I found,

If you follow the waste industry at all, you also probably have an opinion on Tierney’s analysis and argument. Tell us what you think in the comments…

And, yes, there was other news this week:

Dell Increases Recycling Commitment: Demonstrating that it’s one-time title of “Greenest Company in the US” was no fluke, the Texas-based IT company has increased its commitment to recycling plastics, and reclamation of carbon fiber material through revamping its supply chains for 35 products. (Disclaimer: Dell brought me down to Round Rock in 2011 to participate in one of its CAP panels). (via Triple Pundit)

EPA Funds Circuit Board Recycling Technology: Advanced Recovery and Recycling of New York received $100,000 from the EPA to develop its technology for recycling circuit board components further.