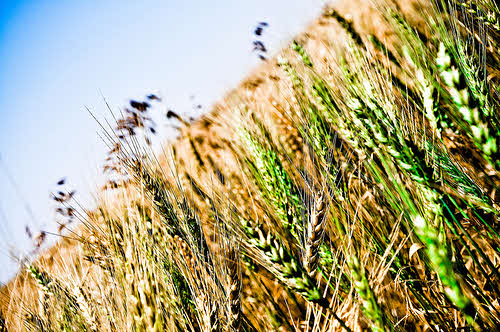 The world’s farmers produced more grain in 2011 than ever before. Estimates from the U.S. Department of Agriculture show the global grain harvest coming in at 2,295 million tons, up 53 million tons from the previous record in 2009. Consumption grew by 90 million tons over the same period to 2,280 million tons. Yet with global grain production actually falling short of consumption in 7 of the past 12 years, stocks remain worryingly low, leaving the world vulnerable to food price shocks.

Nearly half the calories consumed around the world come directly from grain, with grain-fed animal products making up part of the remainder. Three grains dominate the world harvest: wheat and rice, which are primarily eaten directly as food, and corn, which is largely used as a feedgrain for livestock. Wheat was the largest of the world’s grain harvests until the mid-1990s. Then corn production surged ahead in response to growing demand for grain-fed animal products and, more recently, for fuel ethanol. Despite a drop in the important U.S. harvest due mostly to high summer temperatures, global corn production hit 868 million tons in 2011, an all-time high. The harvests of wheat (689 million tons) and rice (461 million tons) were also records. (See data at www.earth-policy.org.) Carryover grain stocks — the amount left in the world’s grain elevators when the new harvest begins — now stand at 469 million tons, enough to cover 75 days of consumption at current levels. Between 1984 and 2001 grain stocks hovered around the more comfortable level of 100 days. In 2002, however, grain production fell 88 million tons short of demand, and since then annual carryover stocks have averaged 72 days of use, close to the bare minimum for basic food security. In 2006, stocks bottomed out at 62 days, setting the stage for the 2007–08 food price spike when international grain prices doubled or tripled in a short amount of time. For poor families in developing countries who spend half or more of their incomes on food, often grain staples, this led to empty plates and frustration. Protests erupted in some 35 countries as the number of hungry people in the world climbed above 1 billion. Following several strong harvests, global stocks were again pushed downward in 2010 when drought, wildfires, and a scorching heat wave decimated wheat crops in Russia and neighboring countries. Exports were banned. Food prices again started to rise, prompting warnings of a second food price crisis in three years. Ultimately the higher food prices between June 2010 and December 2010 pushed an additional 44 million people down the economic ladder into extreme poverty, according to the World Bank. The prospects for the world’s poorest remain grim, as even the record production in 2011 failed to outpace consumption enough to rebuild stocks sufficiently. The tight stocks and food price volatility are occurring against a backdrop of a shrinking area available to feed each person and of slowing crop yield growth. Worldwide, grain is grown on close to 700 million hectares (1.7 billion acres). With the global population hitting the 7 billion milestone in 2011, this leaves 0.1 hectare (a quarter of an acre) planted in grain per person, half as much as in the early 1960s. While the total grain area is down from the peak of 732 million hectares in 1981, largely from the retiring of marginal and eroded land, production is more than 50 percent higher thanks to improved yields. In 1950, farmers could expect to harvest on average 1 ton of grain per hectare. Now yields are three times as high. The problem for world food prospects is that the proverbial “low-hanging fruit” have been picked, with much of the world (notably excepting sub-Saharan Africa) having already adopted higher yielding crop varieties and yield-boosting fertilizer and irrigation practices. Furthermore, yields may be leveling off or even shrinking in some countries. Global grain yields increased by an average 2.2 percent each year from 1970 to 1990. But between 1990 and 2010, the annual gains were just half as large.

A growing number of countries are relying on imported grain to meet their needs, pushing the share of the world grain harvest entering international trade to 12 percent. The United States is far and away the world’s top grain exporter, sending 73 million tons abroad in 2011. This is a quarter of all grain trade. It is followed by Argentina exporting 32 million tons of grain; Australia and the Ukraine, each at 24 million tons; and Russia and Canada, each topping 20 million tons. For corn in particular, the United States dominates the world market, with U.S. corn accounting for over 40 percent of all international corn movement. For this reason, importing countries are concerned about the growing share of the U.S. crop — 40 percent in 2011 — being turned into fuel ethanol.

Japan continues to be the world’s largest grain importer, buying more than 25 million tons of grain from abroad in 2011, much of it to be used as animal feed. Egypt, Mexico, South Korea and Saudi Arabia round out the list of countries importing more than 10 million tons of grain. International grain market dependence is high across the arid Middle East; for instance, Saudi Arabia now relies on imports for 90 percent of its grain consumption. As the country has nearly pumped dry its underground water stores, it is abandoning its desert wheat farms.

China imported a net 5 million tons of grain in 2011, the most significant inflow since the country declared a national grain self-sufficiency policy in the mid-1990s. Though still a tiny fraction of the country’s 451-million-ton consumption, the potential for China to import increasing amounts of grain is a concern to those who watch grain markets and prices. China’s grain imports would be far higher had it not ratcheted up imports of another key field crop, the soybean. Climbing from almost nothing through the mid-1990s, China’s soybean imports hit 56 million tons in 2011, close to 80 percent of the country’s total soybean consumption and nearly 60 percent of all the soy traded internationally. Most of the high-protein soy is used in livestock and poultry feed.

As more people in China are moving up the food chain and eating more meat, milk, and eggs, the country’s feedgrain use has risen dramatically, surpassing that of the United States (where use is falling) for the first time in 2010. China now leads the world in the amount of grain fed to animals, standing at 149 million tons in 2011. Still, as the average meat intake in China is less than half that of the United States, the total grain consumption per person is far lower.

With little arable land around the world left unfarmed and with ever more mouths to feed, farmers face an uphill climb in their efforts to feed the world’s people. The animal protein and food-based biofuel production systems are two areas where fields could be re-appropriated to grow food directly for people instead of for livestock or cars. But as water shortages spread and rising global temperatures bring more unpredictable weather — replete with heat waves, droughts, floods, and other crop-damaging extreme events — a higher level of grain reserves is needed to help cushion against harvest failures. Otherwise, preventing major food price shocks will require bumper harvests year after year, something that is far from guaranteed.

Janet Larsen is Director of Research at the Earth Policy Institute. Data and additional resources at www.earth-policy.org.

Image credit: ShuttrKing|KT at flickr under a Creative Commons license