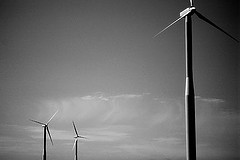 The $700 billion bail out bill the House of Representatives just passed — and President Bush signed — includes tax credits for solar, wind and biodiesel.

“The legislation would extend for one year the production tax credit for wind energy, with an eight-year extension for investment tax credits for solar energy projects.

The bill also provides incentives for the use of biodiesel. However…it promotes…a loophole where companies mix foreign biofuels with U.S. biodiesel to receive the U.S. subsidy, then sell the fuel at a discount to European markets.”

1. Why were these alternative energies included in this crisis-related bail out bill?

2. Is this the beginning of the next crisis: an alternative energy bubble?

Well, what do you think, sustainablog readers?

My initial response is to, of course, be happy for this bipartisan effort to support alternative energy development. But I was a bit surprised to see it was attached to a bill about something that should have full focus right now: the economic crisis.

So, why was it done this way? And is this a good or bad thing?