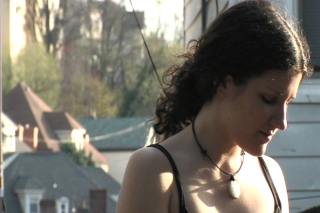 This blog post was written in response to some unusually caustic replies received on my last Sustainablog post, “The Dissonance Between Dreams: Re-writing the Sust Enable Episode Scripts.” It was composed in the interrim between the second-to-last comment, and the final comment, which clarifies the author’s tone a bit and does lay out some common ground.  However, based only on reading the comment quoted below, the commenter inspired deep meditation into myself and to what extent I am trying to exploit privilege–even while claiming to be 100% supportive of global sustainability.  View the comments here.

“It’s only irrelevant in the context of one who still feels entitled to the comforts and privileges that being white in Western civilization has afforded her.”

Overall, I think the most crucial component of changing the world is not privilege: it is responsibility. As someone who was born into a world with social systems favoring her, it is my responsibility to address and counteract these effects. As someone who enjoys the benefits (but not the costs) of systems that hurt the environment for future generations, I have the responsibility to try to undo the harm done in my name or the name of the dollar I spend.

You disparage psychology, but I believe that our shared psychological needs-take Maslow’s pyramid, for example-absolutely influences the immediate decision-making process of every human being. For Americans, it means that we often don’t opt to do the most responsible thing, if it is not also the most convenient and most personally-positive thing as well. Once again, this all goes back to perspective-if a hot shower feels good to me immediately, and I will never feel the worldwide damage that such an action causes, then I can hide from such knowledge and forgive myself for a single shower. With millions of people making such inner decisions-in situations with varying stakes-well, most of us can see the problem we are facing now.

I think psychology will be key, too, in fixing this little biological oversight-we can create social systems which enforce a global responsibility in personal situations (where our limited perspectives are failing us). If we can unite on truly valuing the Earth’s biosphere, then we as people, as lawmakers, can create systems of justice-environmental justice-that as validly as possible account for additions and subtractions of valuable assets within the Earth’s limited resources. This idea may sound radical-but it is amazingly simple. Often, the average person forgets that he or she is a lawmaker-that laws are not sacred nor eternal. People make them and break them according to their needs.

Yes, the innovators of the field of psychology are in fact dead, and white… points of which I fail to grasp the relevance, but factual nonetheless. Yet ideas-ideas that are fruitful to human society, as well as ideas that are dangerous-live on. I think psychology will be a useful tool in orchestrating equality. I think racism is very destructive and not useful. The author of the comments seems to think oppositely. But bless the Internet for allowing us a medium to air our differences in opinion, and strive to find a common ground.

One thing we can agree on outright, is: rich white men in positions of power get what rich white men in positions of power want (see the $700 B government bailout if you need any evidence-which you shouldn’t.) I see that clearly, and am daily confined by decisions made on such upper echelons of human society-as you are. I am also daily agitated by this awful inequality of power and privilege. I believe you are too. I was born, to some meager extent, privileged by this state of affairs-however only, as Howard Zinn would argue, to “act as a buffer” between the upper classes and the lower classes.  I am limited in my actions and attitudes because of my situation, wrought from the decisions of innumerable people born before me. So are you.

Recognizing these limitations, I tried to do something constructive with the Sust Enable Project: present viable options for modifying the average American’s lifestyle to be more close to 100% environmental sustainability. (Just a note: when I say “average American,” I truly mean it, because the options focused on in Sust Enable cost little to no money at all, so these sustainable ideas can be accessible to everyone). The blog post which you initially commented on discussed my troubles during the project of trying to live in a number of ways which were environmentally sustainable, but which left me miserable, stressed, and sick. Feel free to attribute this to my being accustomed to “privileged” activities like hot showers and being in buildings with climate control-this is also true of the millions of other Americans-a fact which cannot be overlooked. I frankly don’t know what it is like to live any one else’s life, Alfonso. But I can do something that contributes to others also sharing in my realm of understanding-that of the “average” American’s experiences-to try to make sustainability more accessible and mainstream. To try to help from within my privileged place.

The statement made above implies that I am the only person who dares treasure hot showers, because of privilege afforded to “me” alone.  You hate the system that creates privileges for me-privileges for people who are not like you. Instead, you direct hatred at my personally. Did you know that I hate this system too? Did you know that every day, I struggle to think of ways to combat it? You may be surprised to hear that the Sust Enable project is actually one of them: one of its roles is to combat thoughtless consumerism at the grassroots-to encourage Americans to see their choices differently.

It is normally a moot point, but apparently necessary, to remind you that I cannot help being perceived as white, nor female, nor a citizen of the wealthiest nation on Earth. The only thing I can do is try to be constructive to the struggle for planet-wide justice and equality-even within the physical labels that you do not hesitate to wield like weapons.

Let me insist: I am not the enemy. I am far, far closer to your ally and comrade than an enemy. The true enemy, I am sure you’ll agree, is the system-thousands of years old-which allow the wealthy and privileged to make dangerous decisions on behalf of the rest of human population (and the rest of the Earth’s living creatures).

The only way our enemy will be effectively combated is through unity-across race, across gender, across privilege. I, like you, can fantasize about a perfect society all day and all night-that will make no difference to the reality of hideous injustices that exist every day and every night that I fail to act on it. As of today (and tomorrow, most likely)… injustice and privilege exist. In order to tear down this system, all peoples must work from the positions they are afforded by society to make a new society.

In conclusion, please do not continue to direct vitriol toward individuals, simply because you cannot direct them at the whole of ignorant, privileged society. The result of such language only produces shame and self-hatred for the feelings we have. In a post in which I honestly tried to grapple with the unexpected feelings brought on by the Sust Enable project, I was rebuked harshly for daring express my honest emotions-because my honest emotions were not the ideal emotions.

Yes, ideals are important. The unfathomably massive social movements you mention that will likely curb our extreme environmental degradation-such as tearing down our current infrastructure, including food and water, and “somehow controlling population”-would require the massive organization, commitment and unity of thousands of humans. But with rhetoric designed to hurt instead of heal, and divide instead of unite, you may find you are contributing nothing toward that goal.

As a white female who lives in America and as an anarchist, I welcome dialog from people of different backgrounds about how we can work together to make our situation better (granted, I don’t get enough interaction with people outside my regional and ethnic “bubble” as I would like.) However, next time you venture to address me, a person who has only been connected to you through the vast communication resource (and probably the only tool today which can bring humans together on a huge scale) known as the Internet, I request that you address me about what I can do-not what I can’t, and for who I am-not for who I ought to be.