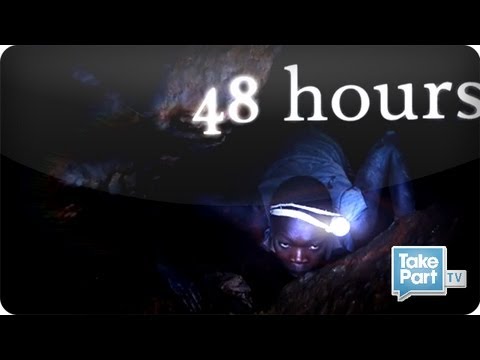 Do you recycle your cell phones? It’s a great practice for insuring that toxic materials in those old phones don’t make their way into the environment. But what about the other side of the cell phone lifecycle? Do you know where the materials come from?

It turns out that many of the minerals in that phone have an ugly story behind them, similar to that of blood diamonds. TakePart.com, a project of Participant Media, produced the PSA above as part of a larger campaign to educate the public about the role “conflict minerals” such as tin, tungsten, gold, and tantalum play in funding armed groups fighting in the Eastern Congo. According to Raise Hope for Congo, a campaign of the Enough Project,

The conflict in eastern Congo, the deadliest in the world since World War II, is being fueled by a multi-million dollar trade in minerals that go into our electronic products from cell phones to digital cameras. Over five million people have died as a result of the war, and hundreds of thousands of women have been raped in eastern Congo over the past decade. The armed groups that are perpetuating the violence generate an estimated $144 million each year by trading in [the above-mentioned] four main minerals…

Want to join the effort to keep “conflict minerals” out of your electronics?

Watch the video, check out the Raise Hope for Congo site, and then take the activist pledge (you can get a link to the pledge by following the instructions at the end of the video). Let cell phone and electronics manufacturers know that you’d like them to pledge to trace their supply chains of these materials, and conduct independantly-verified audits of those supply chains. Also let them know you’ll be keeping an eye on them, and purchasing only from manufacturers who take the pledge.

Interested in learning more about what’s happening in the Congo? Keep an eye on sustainablog… I’ll be talking to folks at Enough, and sharing what I find out.