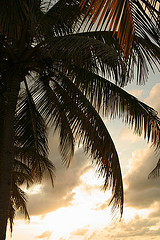 As the biggest global warming polluters gather for a 2-day meeting in Honolulu this week to hammer out a post-Kyoto agreement, the tiny state of Hawaii is taking some of its own big steps to curb emissions.

Hawaii has unveiled a plan to become the first state to get the “vast majority” of its energy from renewables and become “America’s model” for a 21st century energy system. Currently, Hawaii is the most oil-dependent state, relying on it for 90 percent of its energy.

The Hawaii Clean Energy Initiative will work with local and federal officials to get 70 percent of the state’s power from renewable sources in one generation. It will dramatically increase the use of solar and wind power, but also draw upon other native sources as well. Wave power, biofuels from algae or palm oil, and underground heat from volcanoes are just a few of the technologies being discussed.

A Sierra Club representative in Hawaii was concerned that this would steer the spotlight away from the U.S.’s participation in global climate change talks:

Our real main concern, with this as good as it is for Hawaii, is we hope it doesn’t distract from the major task at hand next week which is the United States agreeing to mandatory cuts in carbon dioxide.

The U.S. Energy Department specifically picked Hawaii for this ambitious energy plan because of its resources and state policies supporting a clean energy market, including a requirement that energy companies get 20 percent of their needs from renewables by 2020.