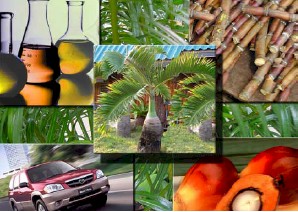 Thanks to my father for pointing me to this AP article (which he found in the Lake Charles American Press) on Asia’s big push into biofuels in the face of high oil prices. Asian countries have big plans for biofuels development, but experts worry that they may be setting their sights too high:

Indians know better than to eat the plum-sized fruit of the wild jatropha bush. It’s poisonous enough to kill.

But with oil prices surging, the lowly jatropha is experiencing a renaissance of sorts – as a potential source for fuel for trucks and power stations. The government has identified 98 million acres of land where jatropha can be grown, hoping it will replace 20 percent of diesel consumption in five years.

“We have found that we can produce biodiesel from it. If we can keep the price down, the future looks bright,” says R.K. Malhotra, who oversees the Indian Oil Corp.’s research center that is running tests on the oil.

India isn’t alone. All across Asia, governments are searching for crops that can help them offset a dependence on imported oil that can only skyrocket as their economies soar. Palm oil and sugar cane are the dominant crops in the region, but everything from coconuts to castor oil to cow dung is being tested for fossil-fuel alternatives such as ethanol and biodiesel.

Most experts also believe that, using current technologies, there isn’t enough land to make a serious dent in oil consumption. Some scientists say production will consume more conventional energy than it will save, and environmentalists came out this month against plans by Indonesia to convert millions of acres of rain forest on the island of Borneo into palm oil plantations.

“One criticism of biofuels is that if you want to go from 2 percent to 20 percent, you would have to direct so much of that agriculture from food to fuel that there would be real competition between the two,” he told The Associated Press in a phone interview.

“Even worse, if we have a famine in part of the world, we would have to make a decision as a society between food or fuel.”

Of course, that’s a decision that many of Asia poorest people are destined to lose. The region’s powerhouses, India and China, are doing a fantastic job of developing renewable energy sources, and biofuels can certainly play a positive role in this development. If they’re produced at a scale that ends up contributing to hunger or environmental degradation, though (such as in Indonesia’s plan), we can hardly call that sustainable. In many ways, Asia’s doing well in leapfrogging; their rate of development and economic growth, though, creates a powerful conflict between the desire for energy to fuel this growth, and the need to do this in the least destructive manner. Until we in the West (particularly the US) start matching our actions to our rhetoric, we can hardly fault poorer regions of the world for fueling themselves in the same ways we do. I noticed for instance, that this article doesn’t miss a beat in referring to nuclear power as “renewable energy” in a paragraph towards the end… Is there any way of powering the current rate of development? Or, are we all destined to “downshift,” whether we like it or not?