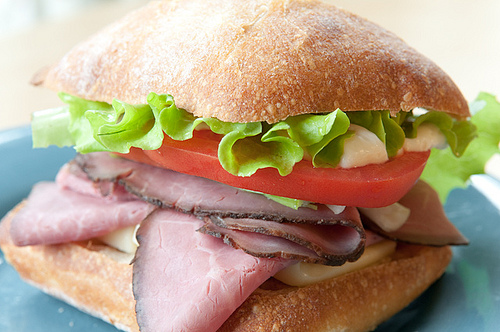 Bacteria are one of the few reasons that I can remain optimistic about future prospects for feeding humanity.  We who are involved in feeding the world face many challenges in addition to population growth (climate change, peak oil, growing Asian middle classes..).  Still, we might just pull it off because we have microscopic friends that allow us to tap into almost limitless supplies of two key nutrients – nitrogen and cellulose. I wrote a post about this when I first started blogging, but I want to revisit the topic.

The earth’s atmosphere contains ~80% nitrogen gas (N2). Nitrogen is a key element for making proteins and nucleic acids that all living things need to grow.  But this super-abundant form of N cannot be used by plants. There are only three ways that nitrogen gas can become usable.  Lightening turns some of into nitrate, but the main, natural way it happens is through Biological Nitrogen Fixation (BNF).  Certain specific bacteria have the ability to convert N2 into usable forms (NH4 – ammonia, or NO3 – nitrate).  Bacteria like Bradyrhizobium associate with the roots of “legume” plants (alfalfa, peas, beans, soybeans…).  They trade plant-converted solar energy for nitrogen in the form of nitrate.  They can usually supply all that these plants need, and the residue of that crop provides a good share of what is needed by the next crop that does not “fix nitrogen.”  There are also some bacteria like Azospirillum that associate with the leaves of grasses (e.g. sugarcane, Miscanthus, switch grass…) and make some usable nitrogen. 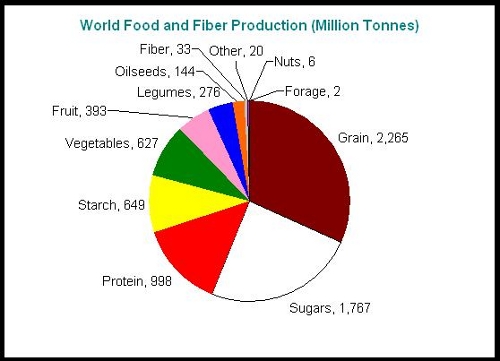 In the chart above you can see the significant, but still relatively small “legumes” sector in blue. Nitrogen fixing bacteria associated with legumes make a small but significant contribution to our food supply.

Historically the biggest limitation to crop productivity has been the supply of nitrogen.  The growing world population was fed by “mining” the nutrients on more and more new, “virgin” land and by using the small amount of nitrogen available in manures – essentially harvesting the inefficiency of those animal systems.  In many societies around the world (particularly Asia and Africa), people were being stunted in their physical and mental development because of a lack of protein due to nitrogen limitation (wheat, the key calorie source of the West is higher in protein than rice, the key calorie source of the Orient).

In the early 20th century, German scientists, Fritz Haber and Carl Bosch developed a process (now called Haber-Bosch) which uses a hydrogen source (natural gas) to convert atmospheric N2 into NH4 with the aid of a catalyst.  They were awarded the Nobel Prize for this because it completely changed the world of agriculture.  When Haber later lead the gas warfare effort for Germany in WWI, it certainly compromised his legacy, but the German chemists’ contribution to the food supply remains an important reality.

Abundant Nitrogen Is Not Without It’s Downsides

As is so often the case, very good things also have very negative potential. Once nitrogen gas has been converted to ammonia (NH4), it can volatilize and leave the field where it was used it as a fertilizer.  When soils are saturated with rain, certain bacteria “nitrify” the ammonia into the nitrate ion, NO3-.  Both ammonia and nitrate can be absorbed by the plant, but nitrate is soluble in water.  That can be good in the case where that allows it to move down to where the roots are growing.  That can be very bad when it moves all the way to ground water or with runoff or drains into streams and rivers and eventually the Gulf of Mexico to create a “Dead Zone.”  There are very good practices to minimize the water pollution issues for nitrogen fertilizers, but there are also economic drivers that prevent all farmers from using them.

Soil “de-nitrifying” bacteria convert some nitrate back to N2 gas to complete the “nitrogen cycle,” but in the process they tend to leak some nitrous oxide (N2O). This form of nitrogen is, unfortunately, a greenhouse gas that is >300 times as potent as CO2 at driving warming.  The nitrifying bacteria (NH4 to NO3) also do some of this.  Typically, only 1-2% of farmer-applied fertilizer turns into N2O, but it is still one of the largest components of the carbon footprint of farming.  Fortunately, there are many farming practices that can greatly limit the production of nitrous oxide and also save on fertilizer cost.

So we see that the challenge is to harness the capabilities of the good bacteria and limit those of the bad.

In much the same way that there is a huge abundance of N2 gas, there is a huge abundance of cellulose because it surrounds every cell of every plant on earth.  The problem is that humans can’t digest cellulose.  Human societies have been tapping into the cellulose resource for millennia through the agency of grazing “ruminant” animals.  The complex digestive systems of these animals (cows, sheep, goats, camels, yaks…) house another set of beneficial bacteria that are among the few things on the planet that can digest cellulose.  Thus, through these animals and bacteria, hundreds of millions of acres of grassland can be turned into sources of human food (meat and milk).

In recent decades there has been a trend towards non-ruminant meat sources (chickens, turkeys, pork…) and towards “grain finishing” of beef. This is possible because of the huge increases in the productivity of the crops used for those purposes (maize, soybeans, sorghum). But even in the US, the majority of cattle spend most of their lives outside of confined animal feeding operations (CAFOs) living off of grass and hay and the cellulose they contain. The same is true of the huge global dairy industry. The burgeoning middle class of Asia wants to eat more meat and dairy, and so there will be demands on the supply of feed grains. To supply this demand will require the contributions of both the nitrogen fixing bacteria and the cellulose digesting bacteria.

So, you can see that a very large proportion of the world food supply is being made possible by bacteria. They make our lunch. No, its not free, but it is lunch.