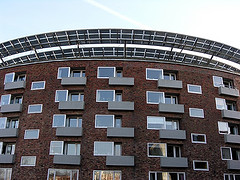 A North American organization of energy experts issued a report that found that building more green buildings is the best way to cut carbon dioxide emissions (CO2), one of the major contributors to global warming. In fact, green buildings could cut emissions more deeply, quickly and more cheaply than any other global warming mitigation effort.

The Commission for Environmental Cooperation (CEC) was set up by Canada, the U.S. and Mexico to address environmental concerns raised over NAFTA. A representative of the CEC told Reuters:

The investments made for climate change benefit in buildings have direct payback, generally from the point of view of reduced energy costs and water costs as well the indoor health environment and increased productivity of the inhabitants of those buildings.

Buildings in North America emit about 2,200 megatons or 35 percent of the total global warming emissions on the continent. If building construction adopted the CEC’s recommendations quickly, that amount could be cut down to 1,700 megatons by 2030 compared to the business-as-usual approach.

So what’s stopping the change? The report found that capital and operating budgets are often kept separate, instead of a government or other institution taking into account the lifetime budget of a construction project. This separation creates a disincentive to build green.