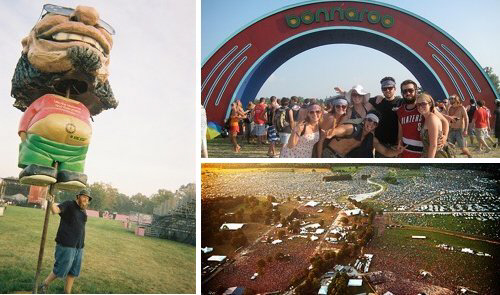 In just seven years the Bonnaroo Music and Arts Festival has emerged as the premier music festival in the United States, if not the world. With the biggest names in music from genres across the musical spectrum taking to thirteen stages and providing festival-goers with four days of good music, danceable beats and pleasing melodies, this year’s Bonnaroo, from June 11-14 in Manchester, Tennessee will be no different from the last seven.

But in addition to the mountains of music and non-musical activities, the festival, which last year was named one of eighteen music festivals worldwide to receive the Greener Festival award, added several new green dimensions to its already impressive greening efforts.

Like the much newer Rothbury Festival up in Michigan, festival organizers at Bonnaroo have been hard at work finding new ways to green the festival scene and engage fans in discussions, seminars and educational programs about important sustainability topics and the pressing environmental issues of today. In addition to incorporating an environmental mission statement into every vendor contract, festival organizers have built upon past successful sustainability efforts and mixed in some new ones to give festival attendees a greener music festival experience.

Below are a few of the pre-festival green highlights, but stay tuned to Green Options for green updates, photos, interviews and reports from the ground at this year’s Bonnaroo Music and Arts Festival.

Planet Roo: The culmination of the festival’s environmental mission statement while on site is Planet Roo, an eco and social activism village dedicated promoting socially responsible lifestyles. Planet Roo is where you can interact with environmental organizations like Rock the Earth, Oxfam, Natural Resources Defense Council and HeadCount; eat organic food at a waste-free restaurant; and enjoy interviews and performances on the the Solar Stage, powered by solar-photovoltaic panels.

Local is Sustainable: This year, Bonnaroo will concentrate on a buy local message by purchasing as many supplies and utilities from the Tennessee area as possible (ranging from hay for the police horses to food and drink for the human festivarians). To keep the message reverberating throughout its ranks, Bonnaroo will provide a list of regional food purveyors strongly recommended to all festival vendors and educate patrons about local sourcing in their daily lives.

Bonnaroo Trash Talkers: As always, Bonnaroo will run an extensive recycling and composting program in partnership with Clean Vibes, an organization dedicated to diverting as much of the festival’s waste from the landfill as possible. “Trash Talker” volunteers will staff the waste reclamation centers located within the venue and Centeroo and encourage festival attendees to dispose of their waste in the appropriate receptacles – either recycling, compost, or landfill.

Bonnaroo Green Ticket: You can become a Bonnaroo stakeholder by opting-in when you buy your ticket. Contributions support the development and implementation of sustainable improvements in Manchester, Tennessee.

Victory Garden: A collection of herbs, edible flowers, and heirloom vegetables will be growing in the demonstration gardens outside of the Strawbale Building in Planet Roo. Stop by and stick your nose in some lemon basil or chocolate mint, and stay for one of the workshops on topics such as composting, eating locally, and organic gardening on a budget.

Roasters and Seventh Generation) have returned to engage the Bonnaroo community in reducing their carbon footprint. The Bonnaroo Carbon Shredders want to see if they can get 10,000 folks to reduce their footprint by 10% by Bonnaroo 2010. At the festival they will enlist signatories and educate those interested about simple ways to reduce one’s carbon footprint.

Conscious Alliance Food Drive: Much like the food drive organized at the inaugural Rothbury Festival, Bonnaroo has partnered with Conscious Alliance for the 6th Annual Bonnaroo Food Drive to benefit the Good Samaritan Food Pantry, of Manchester, TN. Last year’s food drive brought in 7,000 pounds of food donations for the hungry in Coffee County. This year, organizers hope to top the 2008 numbers and pull in at least 10,000 pounds.

The Less Bottled Water Program: Festivals like Bonnaroo have been somewhat notorious for over-reliance on bottled water. In an effort to raise awareness of water issues facing the world, reducing waste, and upgrading the drinking water onsite, Bonnaroo and STANLEY/nineteen13 are implementing the Less-Bottled Water Program. For each purchase of the Bonnaroo branded reusable stainless steel water bottle, $1 will go to the Global Water Challenge who’s mission is to generate a global movement to meet the urgent need for safe water and sanitation by spurring collective awareness and investment in innovation by corporate, public, and nongovernmental sectors.

As part of the sponsorship of Bonnaroo, STANLEY also contributed to the on-site water infrastructure improvements which made more clean water available to festival attendees. I can vouch for the big improvements in taste with the new water made available.

Infrastructure Changes: New electricity facilities will allow the festival to plug directly into the local Duck River grid, reducing generator use by 70 percent and virtually eliminating the festival’s need for biodiesel fuel. Tying into the grid also makes it possible for the festival to purchase green power offsets directly from the Tennessee Valley Authority.

For updates from Bonnaroo and beyond, follow Tim Hurst on twitter
Images: 1. Brookage, Yardena 2009, Bonnaroo; 2, 3, and 5. Tim Hurst