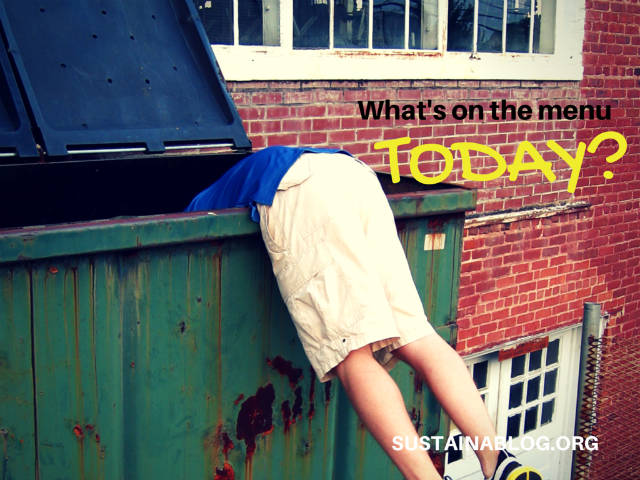 The idea of feeding people struggling to make ends meet through a “pay what you can” model isn’t new: St. Louis-based Panera Bread has opened several cafes around the US that operate on this model, and even tried doing it with one meal at all of their locations. That’s admirable… but a group of catering professionals and activists in the UK have taken this model one step further: The Real Junk Food Project, originally founded in Australia, has a loose network of cafes around England that feed people on this model. What makes them different? They dumpster dive for the food they serve.

No doubt some of your are thinking “Yuck”… that reaction has been enough to shut down such efforts here in the US. Apparently, the Brits have stronger stomachs… or, at least, they’re not willing to keep hungry people from eating perfectly edible food that’s been sent to the “skip.” The newest location, a temporary “pop-up” restaurant operating out of The Crofter’s Rights pub in Bristol, works just like the rest: it’s run by volunteers on a “pay-as-you-feel” model. The menu changes daily based on what ingredients the volunteers find in local dumpsters.

OK, that’s a great way to feed people… but aren’t these folks taking a big risk with safety? No: according to KTRK in Houston, co-founder Sam Joseph has taken a course in sanitary food preparation, and all volunteers use standard food safety practices to make sure they don’t make anyone sick. If something doesn’t look or smell right, they don’t use or serve it… period.

Other cafes based on this model exist in Manchester, Swinnow, and Brighton. The organization’s flagship PAYF cafe in Armley is currently raising funds to stay open, so if you think this is a great model for feeding hungry people and reducing food waste, consider tossing a few bucks their way.

Taking a dumpster dive isn’t for everyone – I’m still not doing it (at least for food, anyway) – but I’m pretty impressed by those who are committed enough to take the plunge… literally. If you know of other organizations taking innovative steps to rescue edible food and get it to people that need it, let us know about them. And follow Skipchen in Bristol on Twitter…