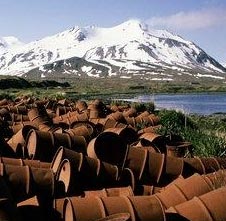 Yep, you read that right. No matter how many times the proposal to drill for oil in the Arctic National Wildlife Refuge goes down in defeat, a few folks in Congress seem to figure out a way to prop up the body. This time, Republican Devin Nunes of California is taking the rather creative approach of promising to place ANWR oil royalties in a trust fund that would be used to fund renewable energy projects. I am not making this up…

All monies placed in the American-Made Energy Trust Fund can only be used for the development of new homegrown technologies that will fuel America in the future. The Bill, of course, will have to compete with a flurry of energy legislation put forward by Congress this summer.

“Congress has a responsibility to deal with our nation’s energy demands in a bipartisan manner that benefits all Americans. As such, we have proposed the largest investment in alternative energies in the history of the United States and, most importantly, it can all be done at no expense to the taxpayer,” said Rep. Nunes.

I’m so flabbergasted by this one that I’m not even sure where to start. The most obvious problem is the time frame (which, curiously, gets no mention from Rep. Nunes) — it will be years, maybe a decade, before we see any royalties coming out of ANWR. I suppose Congress could borrow against estimated royalties, but then, of course, the investment does cost the taxpayers money in the form of interest on that debt. Secondly, we’d be canceling out much of the benefit of any renewable energy that comes from this plan by drilling the oil. Thirdly, no amount of renewable energy will offset the ecological damage done to the refuge. Fourthly, Rep. Nunes’ plan involves coal to liquid gasification and carbon sequestration, neither of which is particularly renewable (and sequestration may just be plain dangerous). Finally, this is just an incredible insult to the intelligence of those of us pushing for renewable development — even if all of these other factors weren’t in place, we can all count plenty of instances of trust funds being raided for more politically expedient spending. While I’m likely giving this really bad bill more attention than it deserves, I can already hear the rhetoric: “But, we’re trying to support renewable energy — isn’t that what you want?” Not from this kind of devil’s bargain, Congressman.