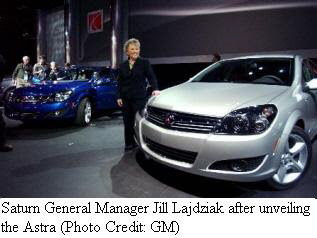 Apologies for not getting this up sooner… was in bed at 8:30 Wednesday night, and yesterday was traveling home day…

I spent a good part of Wednesday afternoon talking to GM executives. We’ve got audio files that we’ll be sharing with you as soon as we get some glitches smoothed out, but I wanted to give you a quick overview.

GM scheduled a group interview/conversation with the bloggers at the show and our colleague Bob Lutz, Vice Chairman of Global Product Development. If you follow GM’s FastLane blog, you know that he’s pretty outspoken — that was clear in our discussion, too. It was a fascinating meeting — Lutz addressed not only environmental concerns (even what he thought would happen to vehicles like the Hummer with GM’s stated commitment to “reinventing the automobile”), but also the history of design at GM (and how it’s come back into prominence), and even the perils of blogging with a PR team watching what you say!

I also met with Saturn’s Director of Brand & Product Development Lisa Hutchinson. With the unveiling of the Astra, the Saturn folks were clearly in demand — I was originally supposed to meet with Saturn GM Jill Lajdziak, but the radio folks kept her for themselves. Lisa was clearly in demand, also, so we kept it short and sweet. Essentially,

The last interview I did, with GM’s VP of Research & Development and Corporate Strategy Larry Burns, was a blogger’s dream (even when it’s a green blogger meeting with a high-level executive of a major auto company). I was impressed not only with Larry’s passion for his company and its products, but also his command of that company’s environmental impact, and its efforts to address them. When I brought up the Rainforest Action Network and JumpStartFord‘s assertion that GM is focused on green concept vehicles and dirty production vehicles, he answered very thoroughly and very candidly. It’s a wonderful discussion, and I can’t wait to bring it to you.

I’ve got to admit I came away from these meetings pretty impressed with GM’s ideas about “greening” the automobile. Of course, we’ll have to keep a close eye on them, as well as other car manufacturers — everyone’s talking green now, but the proof will be in the actions they take. We should probably keep the Wal-Mart standard in mind — judge them by their actions. But we also shouldn’t take the relatively easy step of writing GM off because it killed the EV1 and builds the Hummer. If they really get it, the potential for positive impact is tremendous — and we’ve got to encourage that. I hope you’ll listen to the interviews once I get them up here… lots and lots of food for thought.