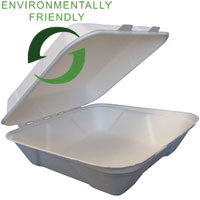 So you’ve made the switch to reusable shopping bags, and you’re feeling pretty good about being able to answer the eternal grocery store question of “paper or plastic?” with a hearty “Neither!” But when you’re not doing the cooking at home, you probably don’t get a choice about avoiding much of the plastic packaging that keeps your food warm and safe on its journey from the restaurant to your home.

If you’ve ever felt a pang of guilt about how much garbage is created when ordering takeout, you’ve got good reason.  All those disposable containers and plastic bags made from petroleum create an environmental impact that goes on long after you’ve enjoyed the last of your Pad Thai leftovers. According to one report cited on Treehugger, over 1 million plastic bags are consumed in this country every minute. How many of those bags wind up in landfills after one use or, worse, end up wreaking havoc on marine life in the world’s oceans, is difficult to calculate. But it’s a trend that has been on a troubling upswing for a long time.

To address this problem, an increasing number of restaurants and other food service providers have started to switch from petroleum-based plastic take-out items to compostable products made from renewable resources, such as corn (PLA) and sugar cane fiber (bagasse).  One of the major barriers that restaurants face when switching to such bio-based containers, however, is a painful difference in cost.

For example, restaurateur Dan Rosenthal who runs casual-Italian minichain Sopraffina Marketcaffe in Chicago found that he would pay a heavy price to replace the 400,000 non-biodegradable plastic bags he went through each year. The switch would entail 7 cents more per bag, for a total of $28,000 every year.

As this inspiring profile that appeared in the Chicago Reader chronicles, Rosenthal ponied up the money to switch to the bio-based bags anyway because he couldn’t stand the thought that his restaurants might be killing the sea turtles his activist mother was trying to save in Florida. But he found it hard to expand his use of more eco-friendly disposable wares because of the high cost and, in some cases, sheer lack of availability from distributors in the Midwest.

So Rosenthal enlisted the help of another well-connected figure in the Chicago restaurant scene, Ina Pinkney, to help organize other food service providers to combine their buying power and lower costs. In fairly short order, they had assembled a loose federation of environmentally focused food service providers into the Green Chicago Restaurant Co-op.

Bringing other restaurateurs and industry professionals on board turned out to be the easy part. The new co-op had to negotiate complicated pricing structures with a hierarchy of manufacturers, brokers, distributors, and redistributors just to make green products available in the Chicago market at all. One of its first successes was landing a line of corn-based containers, cups, plates, and cutlery manufactured by a Boulder company called Eco-Products.

The Green Chicago Restaurant Co-op has now created enough momentum to begin expanding the types of green supplies it orders–toilet paper is next on the list. The co-op is also planning future projects such as a joint recycling program and a free trade show for hospitality professionals featuring more than 100 green manufacturers and suppliers.

Stories of business leaders with a concern for the environment banding together to goose the green economy always leave me feeling optimistic. It takes real courage to buck the system, especially when your livelihood is at stake. As the Readerstory relates, the road to eco-smart restaurant operations isn’t an easy one: Conventional distributors don’t take kindly to being replaced, and they are often willing to play hardball with the early adopters. Another twist in this story is the uncomfortable fact that a lot of these alternative products are produced in China, which significantly reduces the earth-friendly character

But as forward-thinking entrepreneurs like Rosenthal take it into their own hands to start changing the rules of the game, we move closer to the day in which “sustainable business” is just the way business is done. Congrats to the Chicago restaurants who’ve decided to band together and create the kind of momentum that moves the market, not just our consciences. In a food-loving city like Chicago, the changes they are bringing about now figure to have a significant impact in the very near future.

Chow.com – How Green Is Your Takeaway Container