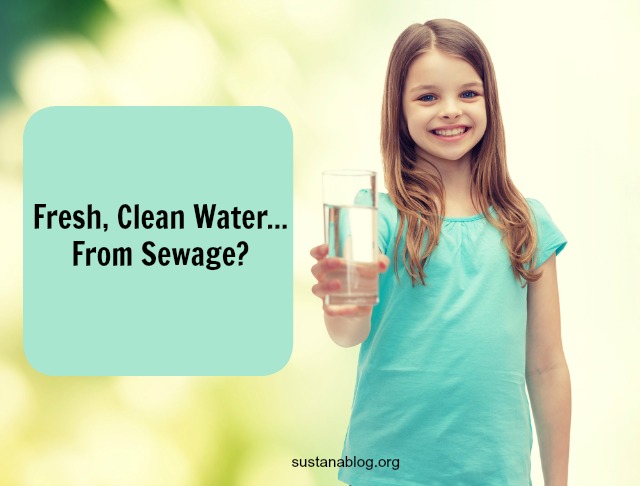 Governor Jerry Brown’s order for a 25% reduction in statewide water use has received a ton of attention for the things not included. Agriculture, for instance, isn’t subject to the order designed to help with the current California drought. And companies extracting water to put in bottles can continue to do so. No one’s mentioning sewage treatment, though, which no doubt accounts for millions of gallons each year… because that’s absolutely necessary just the way it is, right?

No… water used to treat sewage can be recycled to the purity necessary for drinking water. I know, that sounds kind of gross, but as the Los Angeles Times points out, numerous localities around the world, including some in California, are already using “toilet to tap” water systems. Even Bill Gates has gotten in on this game. And some think that LA-area residents, which rejected such a concept in 2000, might be coming around. Even the idea’s most fervent opponents have softened their stances:

Recently, a leader in the effort to stop the Los Angeles project more than a decade ago said he still opposed it but might consider a new plan if officials made a solid case for it. He said one of the reasons he opposed the original plan was that “incompetent” officials failed to explain their rationale to residents in the first place.

“You know, toilet to tap might be the only answer at this point,” said Van Nuys activist Donald Schultz. “I don’t support it, but we’re running out of options. In fact, we may have already run out of options.”

The concern at this point isn’t what you’d think: most get the idea that human wastes can be effectively cleaned from water (though the “yuck” factor is certainly still there). Opponents are more concerned about “trace quantities of drug compounds, hormones and personal care products found in wastewater and surface water”…  for which there’s currently no regulatory structure.

Yet, residents in nearby Orange County have figured this out, and – to my knowledge, anyway – appropriately treated wastewater hasn’t affected public health there. I suppose a middle ground of using such water only for non-potable uses might be an answer (especially if they’re exempted from the governor’s reduction order). This might also get people used to this idea, and ready to take the next step.

What do you think? Would you drink treated sewage water? Do you think it’s a legitimate response to the ongoing drought in California? Let us know what you think…