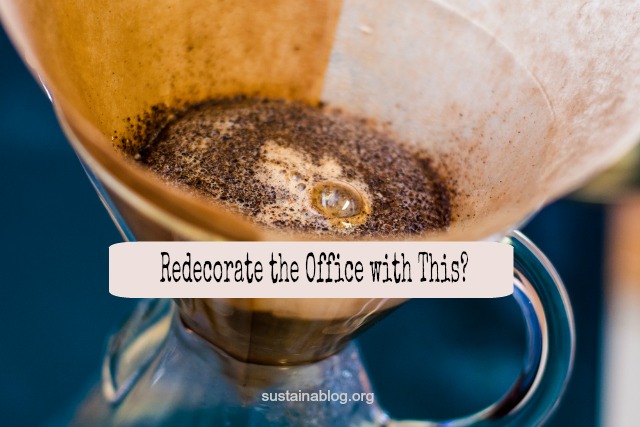 Want to dispose of your coffee grounds responsibly? That’s a no-brainer: throw them in your compost bin, or directly onto your plants. But what if you want to use those grounds, a very common waste stream, to inspire others to think about the potential in materials we throw away? That’s a little tougher… what else could you possibly do with wet, soggy ground coffee? British designer Adam Fairweather came up with “furniture,” specifically office furniture, as an answer.

Before you respond with “Wouldn’t that be wet and uncomfortable,” take a look at The Guardian‘s overview of Re-Worked, Fairweather’s non-profit that turns grounds into chairs. The idea really isn’t about furniture, or even coffee, so much as it is about expanding the answers to questions like the one I asked initially. Fairweather offers this explanation: “My interest is that we can use materials that have a perceived value to them, to communicate and get people excited about the idea of sustainability and social change and environmental management.”

Still, the concept does nicely illustrate the notion that “waste” has all sorts of potential uses: one need only apply a little creativity and elbow grease. And the furniture, as well as the other products created, does look very nice (and apparently stands up well, also).

Is this kind of inspirational activity enough to get people thinking more broadly about the potential of materials they usually throw in the trash? Know of other designers or organizations doing something similar? Whatever your thoughts, share them with us in the comments below.