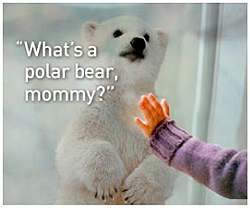 This post is by Lisa Moore, Ph.D., a scientist in the Climate and Air program at Environmental Defense.

All year long we’ve been monitoring developments in climate science, and posting about the important new developments. I thought now would be a good time to look back over 2007 and summarize what we’ve learned.

Here are ten noteworthy science stories we covered in 2007:

1. The Sun is (really, really) not responsible for global warming. This paper wasn’t breaking news, just an extremely thorough review of the science showing why the sun can’t be blamed for global warming. The folks over at RealClimate said it best: “That’s a coffin with so many nails in it already that the hard part is finding a place to hammer in a new one.”

2. American Southwest climate is becoming drier. Global warming has caused a long-term shift in rain patterns. An author of the study said, “You can’t call it a drought anymore, because it’s going over to a drier climate. No one says the Sahara is in drought.”

3. Sea level could rise 4.5 feet this century. This estimate, which is twice the highest business-as-usual value in the IPCC report, was based on the observation that sea level rise has changed roughly in proportion with global temperature.

4. CO2 is rising at an accelerating rate. The cause is mostly accelerating emissions from fossil fuel use, but there’s also evidence that oceans are taking up an increasingly smaller fraction of humans’ CO2 emissions.

6. Smog could accelerate global warming. Ground-level ozone, or smog, impairs plants’ ability to take up CO2, the main greenhouse gas. If (as expected) smog levels are higher in the future, atmospheric CO2 will accumulate faster than it would otherwise.

7. Geo-engineering could be extremely dangerous. One idea for cooling the climate is to artificially reduce the amount of sunlight reaching Earth’s surface. But this approach entails a huge risk. If the technology fails or is stopped, climate could experience a large rebound, with warming rates 20 times faster than today’s.

8. Arctic sea ice is melting faster than predicted. This year it hit a 29-year low, significantly below the previous record set in 2005. Melting ice can set off a cycle that causes additional warming, since dark water beneath the sea ice absorbs rather than reflects solar energy.

9. Two-thirds of polar bears could disappear by 2050. According to a federal report, “because the observed trajectory of Arctic sea ice decline appears to be underestimated by currently available models, this assessment of future polar bear status may be conservative.”

10. Global warming is “unequivocal.” The Nobel Prize-winning Intergovernmental Panel on Climate Change concluded that human activities have caused most of the warming over the past 50 years.

Please share this list. It’s a great way to help people catch up if they haven’t been paying close attention.