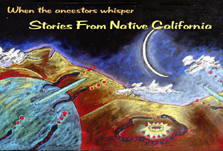 Last week, I had the honor of listening to When the ancestors whisper…Stories From Native California, produced by my friend Neil Harvey of the Bioneers for the California Indian Storytelling Association (CISA). Sitting in my neighbor’s rustic log cabin sipping local wine, the elders’ voices reached my soul and I lamented for the lack of oral history within my own culture. When the ancestors whisper… features Native American storytellers Darryl “Babe” Wilson (Itam Is/Aw’te), Georgiana Sanchez (Chumash/O’odham) and Ernest Siva (Cahuilla/Serrano) coming from the California forests, deserts, and sea. One story, in particular, I felt carried wisdom for the environmental movement and the future of our planet.

Told by Darryl “Babe” Wilson, “Two Moons” is a “warning” story of what might happen to the Earth if we don’t heal the “sickness” of our planet. “Jui ja wa. The old people would say jui ja wa. Jui ja wa, that means the Earth is sick.” Darryl was born on the north side of Sul’ma’ejote (Fall River) at its confluence with It’ajuma (Pit River), which is east of Mt. Shasta. He has doctorate in English and the author of The Morning the Sun Went Down, a honest autobiography about what it is like to grow up Native American in rural California. Based on the recommendation of a Modoc colleague, I read this book over seven years ago, but the story has remained in my heart as if I read it yesterday.

Darryl “Babe” Wilson tells the story of “Two Moons” on When the ancestors whisper… , about how the Moon became a moon. According to the old timers, the Moon used to be like the Earth, with trees, deer, birds, and salmon.

But there was the moon, it was like this Earth at one time. Then two thinkings came: they called thought thinking. Two thinkings came. One thinking nobody knows where the thinking came from, but one thinking said, This is mine; this Earth is mine. That was an Earth at that time. This Earth is mine and I’m going to use it the way I want to use it. The other thinking said, No, you don’t have any right to do that; there’s generations of children coming; we have a responsibility to save this for them so they’ll have a chance to live and be happy too. So those two thinkings got into a big argument, and their big argument turned into a war.

For me, this story foreshadows what could happen to Earth. One side staunchly supports using resources and ignores the facts regarding climate change. The other side is frantically defending the Earth, but will it be enough? Will the Earth become another moon?

And this world, in my lifetime, I can look and see there are two thoughts, that’s the private possession, human rights above everything else ownership, which translates into the right to abuse ownership. So there’s that thinking there. It’s been there ever since America started on this continent. The thinking is just right there. It’s big and huge and ugly, but there are also more people in my lifetime who said, Wait, we’ve got to be careful with this world.