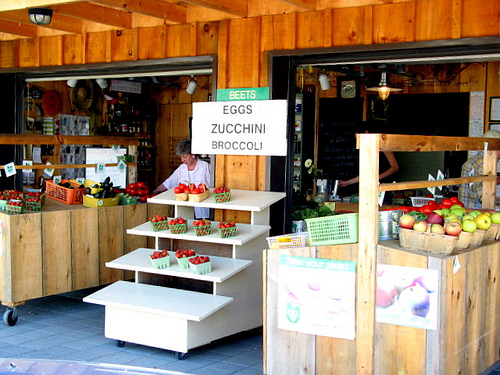 Today I got an email from a Canadian farmer that attended a talk I gave last February at a grower meeting in Ontario.  He was reminding me to send him some of the charts I had used in a presentation titled “Talking to a Skeptical Society About Pesticide Safety.”  His family has a farm that does a great deal of “direct marketing” to consumers who come to the farm to buy fruits and vegetables.  He is often asked the question, “Why are you not Organic?” or “Do you use sprays?”  He explains that he only sprays when it is absolutely necessary, that he follows all of Health Canada’s guidelines, and that he takes regular spray safety classes through Ontario Ministry of Agriculture Food and Rural Affairs (OMAFRA).  His farm uses manual pest control where possible and employs IPM (Integrated Pest Management).

His story is quite compelling, but he was interested in the data to show that most pesticides are a lot less scary than most people think and that there are some pretty toxic natural things that most of us happily include in our diet.  I sent him the slides and then decided that I would like to share them with the readers of Sustainablog.  There is nothing “sustainable” about squandering the land/energy/fertilizer/water/labor/fuel inputs to a crop by letting it be diminished by pest damage.  This farmer knows that, but it isn’t that easy to communicate that story to urban/suburban customers.  These customers don’t have much context for their concept of “toxicity.”

How Toxic is Toxic?

The US EPA classifies the acute toxicity of chemicals in four categories (I, II, III and IV).  This is the kind of toxicity we all know as how poisonous things are – could they kill you and at what dose?  It is only one of many “dimensions” of human and environmental toxicity, but it is a good starting point to see that “toxins” are certainly not “created equal.”  This is one of those annoying scales where a bigger number is better – the amount of the chemical it takes to kill half of the test rats ranges from >5000 mg/kg for Class IV to <50 mg/kg for Class I.  The chart below shows that there are familiar “natural products” that fall into all four EPA categories of toxins and that things we think of as good (e.g. vitamins, pharmaceuticals…) or desirable (caffeine, capsaicin…) fall into the more toxic ranges.

Many of the most widely used “pesticides” in agriculture in Canada and elsewhere fall into category IV, “Relatively Non-toxic.”  They are probably even safer than their official toxicity rating because it is hard to even feed the poor rats more than 5000 mg/kg so that is usually the maximum rate that is tested.

Many natural products and drugs that we all consume fall into EPA Class III.  So do some very important pesticides.  In the case of the pesticides, they have had ample opportunity to degrade to non-toxic metabolites before the crops are harvested while the natural products are present at significant levels in foods and the chemicals in pharmaceuticals.  Most people think that Organic means no pesticides while in fact it often means the substantial use of Class III toxins.

Class II, “Moderately toxic” chemicals include some important pesticides but also common Organic pesticides, drugs, and my favorite food-based toxins.  There are certainly Class I pesticides that actually fit the image of what most people imagine when they hear the word “pesticide.”  The second graph below shows that this kind of pesticide is a small part of the story in agriculture and getting smaller (the trend would be similar for most crops and geographies.  I suspect that the trend is even more dramatic in Ontario).  Nature has even more toxic offerings, but our food system is quite good at protecting us from these threats.

I don’t know.  I hope he will let me know how it goes with his customer interactions during the 2011 growing season.

Please comment here or email me at feedback.sdsavage@gmail.com. Also email me if you would like higher quality versions of these charts.  My website is Applied Mythology.

Getting the Spring/Summer wardrobe ready? Check out our selection of shoes, from brands like Birkenstock, Chaco, Macbeth, and Montrail.